In the face of market uncertainty, long-term savings have emerged as a major political concern. But uncertain pensions are an obsession largely for the better off.

For the less well-off, ranging from the traditional poor to the aspirant lower middle-classes, that are above benefits, in work but far from comfortable in terms of access to housing or job security, there is a different crisis — which is short-term savings.

Without savings and having typically to borrow at exorbitant rates, far higher than those charged to better-off Britain, the crisis in short-term savings is really a new form of poverty and social exclusion.

The report examines the scope for creating a lifeline banking service based on a new model of credit union, successful overseas. On current projections, credit union members will number half a million by the end of 2004. But the alternate tightening and loosening of state regulation has limited the sector.

The most recent changes, with the transfer of regulatory powers to the Financial Services Authority are likely to lead to closures among the weakest credit unions. While the attraction of the credit union model is that it is one of the few financial services institutions that is relatively straightforward for a community to start small, it is the very lack of scale that can prove problematic. 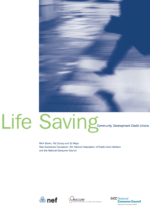