We consider approaches to measuring well-being from the perspective of their utility for policy-making.

Under a reasonably broad definition, well-being has been the subject of considerable recent discussion in policy circles. Examples include:

Dolan et al. reviewed a range of theoretical approaches to well-being drawn from different disciplines and outlined a taxonomy of well-being models in terms of their underlying conceptual approach: 1) preference satisfaction; 2) basic needs; 3) flourishing; 4) hedonic; and 5) evaluative. Whilst it is tempting to see these different approaches as competing with one another, we argue that it is more helpful for policy-makers to view well-being itself as a dynamic process, in which a person’s external circumstances interact with their psychological resources to satisfy – to a greater or lesser extent – their psychological needs and to give rise to positive feelings of happiness and satisfaction.

NEF hosted a workshop with policy-makers from across government. The core of this workshop was a SWOT –Strengths, Weaknesses, Opportunities, Threats – analysis of issues surrounding the use of well-being indicators in policy. In the negative side, an important issue was clarity, in relation both to the distinction between well-being and happiness, and also to measurement and communication. On the positive side, it was noted that well-being is an explicit part of policy discourse across a number of different areas, and also that it is a good fit with several emerging agendas that are not currently using the language of well-being.

Despite considerable and rapidly growing interest, indicators of subjective well-being have not been widely used in policy. Recent work by NEF has begun to develop a framework to help local authorities approach the issue of choosing an appropriate well-being indicator. It outlines three broad approaches to well-being measurement that are of relevance to policy-makers: 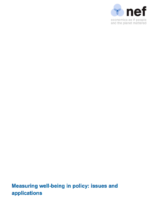