Whatever the character and programme of the next Government, a precondition for its success will be reform of the UK’s financial sector which has made itself rich at the expense of an increasingly fragile economy.

In the aftermath of the devastating recession and in the face of new challenges like climate change, the UK is facing a Great Transition to a new kind of economy.

This Manifesto puts the Great Banking Question at the heart of the election campaign and calls for root and branch reform. The next Government has no more urgent matter than controlling the banks and re-building the system in which they operate. This will include ensuring targeted support for key sectors of the economy, such as the ​“green collar” sector.

No party yet has a credible plan to re-engineer the financial system so that it becomes the socially and economically useful servant of the productive economy rather than the greedy master.

We have a once-in-a-lifetime opportunity to shake-up the provision of finance in the UK, making banks serve the needs of their customers rather than provide short-term gains for shareholders and cream off the profits for themselves. 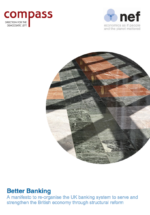