Why the Cap Won’t Fit

Migration is a subject that continues to trouble both politicians and the public, and the issue has become particularly emotive since the recent financial crisis.

The announcement of a temporary cap on net migration by the Coalition government in June 2010 is the latest in a series of measures to restrict entry to the UK.

The cap, which is due to become permanent in spring 2011, has attracted criticism from sections of the business community, academics, migration NGOs, and think tanks. The criticism has focused primarily on immediate impacts on the economy and, to a lesser extent, on social cohesion.

The objective of this report is to bring a longer-term and global perspective to these discussions by considering the major shifts in regional economic power, demographics and the labour market as well as the challenge of climate change between now and 2050. It asks whether, given these dynamics, the cap is a sensible policy measure.

Long-term modelling of migration supply to the UK

To understand the likely impact of the cap, it is important to have an understanding of the realities of migration supply and the way this interacts with UK and source-country needs.

Research has consistently found an inverted u‑shaped relationship between country development stage and emigration levels – that is, as a country develops, emigration initially takes off until the difference in wages and living standards between home and source countries significantly shrinks. After this stage, emigration declines, but does not return to pre-development levels. The UK, for instance, has an emigrant stock equivalent to 9.2 per cent of the population, higher than most developing countries.
Using this empirical relationship, alongside forecast trends in GDP growth, this report calculates possible patterns of emigration between 2010 and 2050 for a selection of current UK source countries under four different economic scenarios, including ​„business as usual‟, a double dip recession, slower growth in developing countries and a global depression.

Under the ​“business as usual” scenario the analysis shows that:

In aggregate, the modelling finds that:

This ​“peak” has significant implications. It happens at the same time that there is projected to be increased need for labour flows to several developed countries, including the UK, due to an ageing population. In this situation there may be competition between developed nations to attract migrants. A restrictive migration regime in the short term may compromise the UK’s ability to attract migrants when it needs them most.

This competition among developed nations for migrants will be compounded by the rise of countries such as India, China and Brazil. It is likely that the development in these countries will divert migrants away from the UK.

Although it is recognised that patterns of development transitions are vulnerable to economic catastrophe and political upheaval, as well as the impact of other shocks such as climate change, these findings provide an insight into a changing economic global context in line with the best available data. The findings thus have major implications for migration policy, and in particular cast further doubts over the ability of a cap to prepare the UK for an increasingly globalised world in which there are several economic superpowers.

To counteract these, and other UK-focused concerns, the report recommends that four principles inform migration policy:

Migration is a complex issue, which affects both the UK and developing countries. Simplistic measures, such as a cap, are likely to be both ineffective in practical terms and damaging in the longer term. It is suggested that the findings in this report may provide a reality check for government, and direct its attention to the long-term results of its current policy-making. 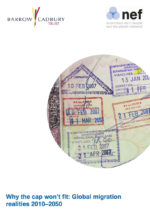