Where did our money go?

In 2008, the Government issued the biggest single public bail-out in history to rescue major retail banks in the middle of a credit crisis. This report asks where our money went, who has benefited from it, and what was asked of the banks in return.

The management of market risk and credit risk has become increasingly sophisticated… Banking organizations of all sizes have made substantial strides over the past two decades in their ability to measure and manage risks.

Ben Bernanke is the Chairman of the US Federal Reserve, the organisation which surely bears the most responsibility for the conduct of the global financial system. His preparation for this role was as an economist, and specifically a scholar of the Great Depression. Given these qualifications, the absurdity of this misjudgement of banks’ ability to manage risks cannot be exaggerated. Just over a year after he made this statement, the global financial system froze, marking the start of the financial and economic crisis currently known more in hope than in reality as the Great Recession. It was in 2007 that the European Central Bank began the public support for the financial sector that grew quickly to colossal scale.

The roots of the crisis

It is hard even to credit that he could have been so wrong. The economic history of the world indicates that crisis after crisis arises from financial failures. These failures follow from one simple cause: the over-extension of credit. Banks lend in quantities and at rates of interest that go beyond the ability of borrowers to repay. Banks lend to each other and drive up the value of assets. Banks hide activity off balance sheet. These practices have existed whenever banking systems have developed. In Britain in the 1700s, there was the South Sea Bubble; in the Netherlands in the 1600s, there was Tulipomania. In his book on the Great Depression, John Kenneth Galbraith reserved a whole chapter for a bank that many regard now as the most powerful in the world: he called it ​“In Goldman Sachs we Trust”.5 With banking unrestrained, economies become based on speculation, and productive activity and work take second place; the rich profit and the poor suffer.

More likely is that Bernanke – as with politicians in all OECD economies – was simply unable to admit the dangers that were so obvious to so many outside the economics profession. To do so would be to concede the failure of the whole system; a system which they and their predecessors had implemented, supported, and extended; a system in the development of which they had been deeply involved. Since the late 1960s, the world economy has danced more and more frenziedly to a tune played by the financial sector. Haldane’s chart makes the turning point somewhat obvious.

The USA, and through it the world, was indoctrinated into thinking that what was good for Wall Street was good for the country. In Britain, New Labour became the most fervent of the financial sector’s admirers. In his 22 June 2006 Mansion House Speech, given less than two weeks after Bernanke’s remarks, Gordon Brown celebrated his resistance to those who wanted to regulate finance:

“In 2003… the Worldcom accounting scandal broke. And I will be honest with you, many who advised me including not a few newspapers, favoured a regulatory crackdown. I believe that we were right not to go down that road which in the United States led to Sarbanes-Oxley, and we were right to build upon our light touch system through the leadership of Sir Callum McCarthy — fair, proportionate, predictable and increasingly risk based. I know Sir Callum is committed to reducing regulatory administrative burdens and the National Audit Office will now look at the efficiency and value for money of our system.”

The extent of the failure is revealed by the extent of the crisis. Yet there has been no diminution of the power of the financial sector; in fact, the crisis is serving mainly to reveal the extent of that power. At each step of the way since crisis began, the bankers have called the shots. Even the Governor of the Bank of England, Mervyn King, has remarked:

“The sheer scale of support to the banking sector is breathtaking. In the UK, in the form of direct or guaranteed loans and equity investment, it is not far short of a trillion (that is, one thousand billion) pounds, close to two-thirds of the annual output of the entire economy. To paraphrase a great wartime leader, never in the field of financial endeavour has so much money been owed by so few to so many. And, one might add, so far with little real reform.”

Moreover, from the point of view of society as a whole, the strategy has failed. Any modest increases in output have not been sustained, private activity has not been restored, and the great rise in unemployment has not been reversed. And now, in the depths of this mess, society faces an unprecedentedly severe assault on public sector services and jobs. Moreover, as Mervyn King indicates, there has still been no serious challenge to the manner in which society organises its financial affairs.

This publication is aimed at detailing these affairs. On one level, the matters appear complex, but public discussion has tended to overcomplicate and not to clarify. No doubt an open public debate would not be in the interests of the financial sector, which gains to such a staggering extent from a system that has become opposed to the interests of the wider public. But the public is beginning to learn that it has been deceived. nef finds:

The economy continues to pay a very heavy price for the failures of the financial system. These matters affect every individual in the UK. At the end of the report we outline a range of reforms that we believe will be necessary to make the banking sector a useful servant of the productive economy and of the new economic, social, and environmental challenges we face. We also call for an open and inclusive public debate and inquiry on the reforms that should, at the very least, be required of the banks in return for current and future support. 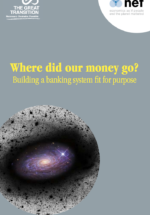