Why we need a bigger public debate on nancial reform

In the light of an apparent return to business-as-usual in the financial sector, NEF organised a banking summit in response to growing public dissent about the conduct of the banks, and to address the too-narrow remit of the Independent Commission on Banking (ICB), also known as the Vickers’ Commission.

Three years on from the full outbreak of the banking crisis, a unique range of leading figures from academia, finance, politics, the law, consumer and civil society groups gathered in London, alarmed at the failure of banking reforms so far. Over 100 experts representing more than 60 organisations attended to address the question: ​‘what would a good banking sector look like and how do we get there?’

The context for the summit was set by government inaction, and a range of other disturbing trends and factors including:

In particular, the Summit noted two issues that have been barely addressed at all, including:

The Good Banking Summit was opened with presentations by Victoria Chick, Emeritus Professor at University College London, Chuka Ummuna MP, Shadow Minister for Small Business and Enterprise, Alex Brummer, City editor of The Daily Mail, and Will Hutton of the Work Foundation. Highlights from these can be found toward the end of the report along with a full list of attendees.

Three things quickly became obvious at the Summit. First, that within its scope, the Independent Commission on Banking (ICB) was under great pressure from financial lobbyists and, second that its interim findings suggested measures that were unlikely to succeed in their stated aims of reform. Thirdly, it was clear that the scope of the Commission was far too narrow, and therefore incapable of advocating reforms that would produce stable, safe and useful banking.

It is hard to see how any process of reform can be successful without first answering the question ​“what do we expect the financial system to deliver?” The question has not been properly asked, let alone answered, by the government or the Vickers Commission. The following definition is offered by nef:

To facilitate the allocation and deployment of economic resources, both spatially and temporally, to ecological sustainable activities that maximise long-term financial and social returns under conditions of uncertainty

Asking such questions reveals the underlying and still unchallenged free-market dogma of Vickers and the government. Social and environmental considerations are excluded, and, despite all the evidence to the contrary, the belief in the supremacy of the free-market sets artificial boundaries around what reform proposals are even admissible for consideration.

This is a reform process that not only lacks vision, but has its eyes half shut.

The Governor of the Bank of England, Mervyn King, famously commented that: ​“Of all the many ways of organising banking, the worst is the one we have today.”

A simple summary of the Summit’s findings would be that the ICB is not going far enough on key issues within its remit, like the separation of retail and investment banking, and that if the ICB cannot extend its remit to address the other areas for essential reform alluded to in King’s comment, there needs to be another process to investigate the vital issues outside its scope.

The Good Banking Summit explored what would provide the foundations for a safe banking system that is also fit for purpose. It addressed areas including: 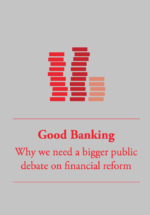