Why discarding fish is a waste of jobs and money

Fish are a renewable resource. If well managed, they can provide endless benefits to society in terms of revenue, food, and jobs. Yet, the problems with fisheries are endemic in Europe and around the world. Discarding – the throwing away of fish – is a problem that has gone on too long.

Each year millions of fish are discarded in European waters, an environmental tragedy that does nothing to help the struggling fishing industry or the fish populations upon which they depend. In one species studied in this report, cod living in the North Sea, Eastern Channel, and Skagerrak, almost 7.5 billion cod have been discarded since 1963; that’s a staggering 1.4 for every cod landed. In cold, hard cash, this adds up to £2.7 billion lost at sea. We can ill afford to squander our environmental and economic wealth; especially given the current economic climate. The scale of this problem has inspired recent action running up to the reform of the Common Fisheries Policy (CFP), such as the Fish Fight television series channelling public outrage into over 700,000 signatories to a petition against discards to date.

But it’s not simply about waste. It’s also about how we manage our increasingly precious natural environment. Discarding is a symptom of poor management and practice. These two factors are also responsible for overfishing this public resource far below its economic potential. European fisheries management continues to use blunt policy tools, such as single-stock quotas, that do little to accommodate the impacts of fishing on the wider ecosystem. Fishing technology is not yet sophisticated enough to avoid catching fish that have not had the chance to grow or reproduce and thus support the future of the stock and of the fishing industry – a loss which we estimate at £7.5 billion since 1963. In essence, the fishing industry is biting the hand that feeds it. Both management and fishing practice need to be smarter and streamlined to respect the dynamic and complex ecosystems they impact and depend upon. Discarding has no place in a sustainable future where we must reconcile runaway consumption with collapsing ecosystems.

So what are the alternatives? Huge emphasis has been placed on creating markets for new species as a solution. Due to the poor health of many European stocks buckling under consumer demand, we strongly caution against this, particularly the sale of undersize and undervalue fish (as discards tend to be). Instead, we should opt for never catching these discarded fish in the first place, allowing them to grow in the sea to re-build the fish population and support a healthy ecosystem. Remarkably, we find that even if total catches were reduced by banning discards, landings could actually increase and the stock would benefit too, getting 13 per cent larger each year. And, fewer catches mean more fish in the sea, and as they grow in size, they grow in economic value. This potential can be realised with smarter initiatives and practice, such as highly selective gear and seasonal fishing in minimal by-catch areas.

In this report we focus on a single species – cod. More specifically, we look at cod living in the North Sea, Eastern English Channel, and Skagerrak. From 1963 to 2008, 8.24 million tonnes of cod were landed from this stock, typically by trawlers and gillnetters from many European countries (including Denmark, the Netherlands and Germany), with the UK catching the single most. This activity has provided economic benefits to fishermen, their communities and economies, as well as nutritional value to consumers. But, this British favourite is both overfished and suffers high discard rates, and is now even considered a species threatened with extinction.

If discards had instead been banned during this period, and left in the sea:

These results show that fish are simply too valuable to throw away. At the time of writing this report, the European Commission has presented its proposal for CFP reform, including a Discard Ban for ​“quota” species. Ministers from EU Member States and Members of the European Parliament now have an opportunity to build on this and see an end to this waste. 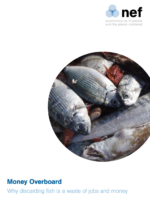