A report for the Department of Health and Sciencewise-ERC

This report provides details of research that was conducted for the Department of Health and Sciencewise-ERC, involving a public dialogue exercise designed to explore the barriers that people experience to increasing their engagement with activities thought to enhance subjective wellbeing.

The Department of Health, in collaboration with Sciencewise-ERC, commissioned nef to undertake a public dialogue exercise, with the aim of exploring three questions:

A series of structured dialogue events was held in six locations around the country, covering a range of age, ethnic and socio-economic groups. The Five Ways to Wellbeing were used as a way to frame the discussion.

Barriers: For some people there was no evidence of significant barriers to engaging in Five Ways-type activities; these people typically felt confident in their ability to change their behaviours as they wished, in control of their lives, or manifestly engaged in a high level of Five Ways-type activity already.
For others, however, there was evidence of experienced barriers. These can usefully be divided into three categories:

Underpinning many of these barriers is the lack of a felt sense of agency. This emerges as a key issue preventing people from making lifestyle changes to improve their wellbeing. In addition, some of the most significant barriers relate to social norms and expectations rather than to ​‘hard’ barriers of time and money.

Messaging: The public’s responses to the term wellbeing are extremely mixed. Some feel that it is impenetrable and too abstract; some equate it with ​‘feel-good’ products and services (skincare, aromatherapy); some link it to mental health problems. The Five Ways to Wellbeing themselves can be interpreted and experienced negatively as well as positively.

Rather than being motivating, framing wellbeing as a scientific issue seems to be unnecessary and even unwelcome for many people. Common sense or personal experience is more convincing than the science.

Analysis of the findings suggests a number of areas for future research and policy development. In terms of communication, the research suggests that attempts to reach the public through social marketing should:

The objective of communication should go beyond merely providing information about wellbeing and the Five Ways and should instead:

Findings from the research are relevant for ongoing work in a number of areas of policy, including the public health and health improvement agendas, mental health, substance misuse and older people. A process of stakeholder policy engagement is currently underway in order to explore the implications of the findings for ongoing policy and strategy development. 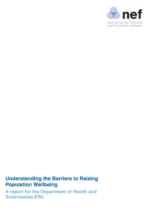