A response to Professor Angus Deaton (2011) of Princeton University who suggests that advocates of wellbeing measurement should be more cautious.

Deaton is right to caution governments against expecting large rapid changes in reported national average well-being as a result of changes in economic conditions but that this does not detract from the value of measuring well-being and we discuss the reasons.

If we are to measure wellbeing as part of a new measure of progress, we need to be sure that our indicators can actually change over time. There are theoretical reasons which make it unwise to simply assume this: amongst them the idea that happiness levels are mostly genetic and people adapt to different situations, but also the idea that our happiness is relative to others in our society.

A recent paper by Professor Angus Deaton (2011) of Princeton University suggests that advocates of well-being measurement should be more cautious. Using data from the USA over the period of the financial crisis, he shows that changes in question order have had a bigger effect on reported wellbeing than the biggest economic crisis since the Great Depression, and that subsequently, policy makers should not look to well-being data as a reliable indicator of a nation‟s progress. In particular he notes the lack of an effect of unemployment rates on wellbeing averages.

If Deaton is right about the lack of a fall of well-being during the recession, and Richard Easterlin (1974) is right about the lack of an increase of well-being since the 1950s, then might the use of wellbeing indicators as measures of progress lead us into a Sisyphean nightmare? Constantly attempting to raise wellbeing, but never being able to? That is the topic of this paper, which will review Deaton‟s position, before responding with discussion and evidence from other papers.

Deaton makes some excellent points, and the impact of question order is something that should not be under-estimated. But rather than see it as a strike against the use of subjective well-being measures, it should rather be seen as a part of a lesson on when they might and might not be useful for monitoring changes over time.

Ultimately, Deaton is right to caution governments against expecting large rapid changes in reported national average wellbeing as a result of changes in economic conditions. But this does not detract from the value of measuring wellbeing for the following reasons: 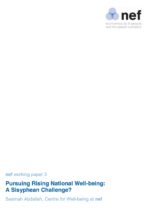