Submission to the Independent Commission on Banking

The Independent Commission on Banking (otherwise known as the Vickers Commission) has been tasked with proposing reform of the banking system in the wake of the financial crisis of 2007-08.

In this paper, we argue that banking is unlike other industries and not subject to normal laws of free-market competition.

Function and Purpose of Banking

1.1 Banking is unlike other industries and not subject to normal laws of free-market competition. This is because banks perform the fundamental function of credit creation that underpins the health of the whole economy, and as a result they enjoy a unique privilege of implicit and explicit government guarantees of their solvency.

1.2 The banking system has the potential to undermine the macro-economic management of the economy as well as having a pervasive effect on social and environmental stability. This justifies a broad interpretation of the Commission‟s terms of reference, and a statement of the function of banking as the point of departure. We offer the following definition: ​“To facilitate the allocation and deployment of economic resources, both spatially and temporally, to ecological sustainable activities that maximise long-term financial and social returns under conditions of uncertainty”.

1.3 Stability is undermined by an inherent contradiction between ensuring a stable monetary system that promotes the public interest on the one hand, and the control of the creation and allocation of credit by private banks on the other. Two broad reforming themes can improve stability: the dispersal of market power and increasing diversity within the banking system, and some form of direct control or strategic guidance over the quantity and quality of credit creation.

1.4 The banking sector does not approximate to anything close to text-book conditions of perfect competition. Indeed, the nature of banking as outlined above is such that a laissez-faire approach will lead to less competition, not more, and even improving competition cannot of itself address all forms of market failure. Without significant structural, regulatory, and monetary reform, it is hard to envisage how more competition will lead to anything other than more bad lending.

1.5 We submit that the Commission should give greater priority to broad public interest than to the profitability of individual financial institutions where these conflict, and should: 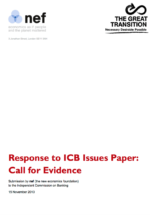