Wellbeing and the Role of Government

The NEF response to a collection of essays published by the Institute of Economic Affairs (IEA) that criticised the idea of using wellbeing in policymaking.

In January the Institute of Economic Affairs (IEA) published ‘…And the pursuit of happiness: Wellbeing and the Role of Government’, a collection of essays that criticised the idea of using well-being in policymaking. This generated a substantial amount of public attention and debate about the issue, which we at NEF welcome. However, we strongly disagree with the conclusions that the IEA reached.

The publication as a whole raises a range of interesting objections to the use of well-being to guide public policy, deserving of consideration. However, it also presents a number of arguments that over-simplify the current state of the well-being research; draw some highly speculative conclusions; and misrepresent opposing viewpoints. The following pages examine these claims and refutes them.

It also examines a broader issue, namely the IEA’s deeper ideological objection to the use of well-being measures. If one believes that any government action is an intrusion into the lives of citizens, then one is unlikely to support a well-being approach. We finish by examining the implicit assumptions of the essays in the IEA report, that government should not intervene in public life. 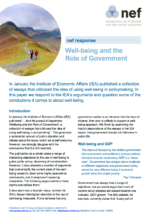