The increasing reliance of the EU on sh from elsewhere

EU citizens are consuming far more fish than European seas can produce, becoming increasingly dependent on seafood from other waters.

If the EU were only to consume fish from its own waters, it would run-out of fish on July 6th, making it wholly dependent on fish from elsewhere from July 7th.

European Union (EU) fish stocks are in an unprecedentedly poor state yet fish consumption throughout Europe remains high. The EU has been able to maintain and even expand its levels of consumption by sourcing fish from other regions of the world, both through the catches of its distant-water fleet and imports. This report highlights Europe’s reliance on fish products originating from external waters for its fish supplies, and provides pointers towards a more sustainable future for dwindling global fish stocks.

The New Economics Foundation (NEF) has estimated the degree of self-sufficiency in fish consumption achieved by the EU as a whole and for each of its member states; self-sufficiency is defined as the capacity of EU member states to meet demand for fish from their own waters. We have expressed the degree of selfsufficiency in the form of a ​‘fish dependence day’. Based on a member state’s or a region’s total annual fish consumption, the fish dependence day is the date in the calendar when it will start to depend on fish from elsewhere because its own supplies have been depleted.

For the EU as a whole, fish dependence day is now 6 July, indicating that almost one-half of fish consumed in the EU is sourced from non-EU waters. Last year, it was 2 July; the year before, it was 9 July. Compared to 2011, this is positive news as the EU marginally reduces its reliance on fish from non-EU waters by four days. Whilst it is still too early to say, we hope that the results mark a change in the trend and a sign that overfishing is diminishing in EU waters. All else being equal, this would manifest itself as improving self-sufficiency. Currently, however, the level of EU self-sufficiency is too low and the degree of overexploitation in EU waters too high. From 2000 to last year’s assessment, the EU’s fish dependence day had fallen earlier and earlier in the year, and is still three weeks earlier than in 2000.

Restoring 43 fish stocks (out of more than 150 EU stocks) to their maximum sustainable yield would increase the EU’s self-sufficiency levels by more than two months (69 days), moving its fish dependence day to 14 September. If directed only to human food consumption, rebuilding stocks could provide for the annual consumption of 90 million EU27 citizens.

Member states with little or no access to EU waters, such as Austria, Slovakia, and Slovenia, evidently become fish dependent early in the year. More surprising, however, is that many member states with greater access to EU waters are also fish dependent early in the year. These include Spain, Portugal, Italy, Germany, and France – all of whom source more than one-half of their fish from non-EU waters.

Our calculations include domestic aquaculture (fish farming) in EU countries, a growing enterprise that has served to marginally offset the overexploitation of EU fish stocks but has not itself been responsible for reversing the trend of increasing fish dependence that has taken place over the past decade. Nonetheless, without aquaculture, the EU’s fish dependence would be 11 June; for big aquaculture producers such as Spain, France, Italy, and Greece, their respective national fish Dependence day would occur more than one month earlier. Similarly, restoring EU fish stocks would result in significant gains in self-sufficiency levels.

In a context of finite resources and growing populations, the current EU model is unsustainable. The EU’s increasing fish dependence has implications for the sustainability of fish stocks globally, which are also overfished, and for the communities that depend on them.

The main message of this report is that rising fish consumption in a context of overexploited stocks is environmentally unviable and socially unfair. The EU has highly productive waters that have the potential to sustain a long-term and stable supply of fish, jobs, and related social and economic benefits, but only if its fish resources are managed responsibly.

In order for this to happen, policymakers need to look beyond the short-term costs that could result from reform and prioritise the long-term benefits that healthy marine resources will provide. 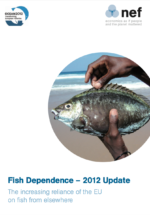