An analysis of UK data

The UK has a unique resource. As of April 2011, the UK’s largest survey, the Annual Population Survey (APS), has included four questions on subjective well-being.

The data from the survey will allow analysts both inside and outside government to better understand the determinants of well-being.

This will provide opportunities to:

This report presents nef analysis of these data. It provides an overview of well-being in the UK, and uncovers interesting patterns related to ethnicity, employment patterns, working hours, local variation in well-being, and well-being inequality.

The subjective well-being questions in the APS ask:

Together, these four questions measure a range of well-being dimensions – hedonic, evaluative, and eudaimonic. As well as examining the different patterns of these measures, we combine them into a measure of overall well-being. Below are some of our key findings.

The government has signalled that it sees its role to be about enhancing the wellbeing of the population. Given that role, these results will be invaluable, not only to policymakers seeking to improve well-being, but for civil society organisations and advocacy groups that want to hold the government to account. Well-being is no longer a vague concept; it is something that can be measured, assessed, and ultimately improved. 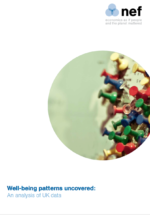