A summary of NEF's fisheries research to date

Fish are a renewable resource: if well managed they can provide endless benefits to society in terms of food, revenue and jobs.

Unfortunately, around two thirds of assessed EU stocks are now over-exploited. This means smaller catches, lower revenues and fewer jobs than if the stocks were at their maximum sustainable yield (MSY).

Taking action to end overfishing is still widely perceived as bad news for the fishing industry. But NEF’s Jobs Lost at Sea report estimates that restoring 43 overfished European stocks to a biomass that supports their maximum sustainable yield (BMSY) would deliver the following benefits:

Overfishing in Europe is a huge economic and environmental problem, yet it is also entirely solvable. The NEF report No Catch Investment finds that if we completely stopped fishing over-exploited stocks today, most could be fully restored within five years, with the total EU fish supply surpassing current levels within four years. In just four years we could have a more plentiful – and more sustainable – fish supply than today.

Although fishing gear technology is advancing, fishermen still have no way of being entirely selective about what fish species they catch. This often leads to non-target species, or bycatch, being discarded as collateral damage.

NEF’s report Money Overboard looks at the costs of the discarding practice, using cod in UK waters as a case study. It found that if, during the period 1963 – 2000, the UK fishing industry had landed cod discards instead of throwing them away, it would have generated an extra €1.15 (£1) billion and supported 711 additional jobs.

Most importantly, the report shows the economic sense in preventing the wrong fish being caught. Had the UK used completely selective fishing gear to spare the small cod and given them time to grow, these same discarded fish would have been worth €3 (£2.6) billion to the UK.

Some methods of fishing create value, others destroy it. Which do we support?

Fish stocks need to be managed in the public interest. This requires maintaining fish stocks at sustainable levels and giving priority to fishermen who deliver higher social, economic and environmental benefits. One step towards this would be to allocate fishing quota shares and public funds on the basis of who creates the most value to society.

NEF’s report Value Slipping Through the Net compares two types of fishing methods – gillnets and trawlers – in terms of the value they create for society. In doing so, it considers net revenues, employment, subsidies, discards, and greenhouse gases emissions. It found that:

Decades of overfishing and poor management has resulted in less productive fisheries and therefore a continual loss of jobs and livelihoods. We are now in a position where we eat more fish in the EU than we can currently harvest and as a result we rely on imports from elsewhere to bridge the gap. The expansion of EU aquaculture has done very little to lessen this shortfall.

NEF’s Fish Dependence report illustrates this problem in a new way. It shows that if, for one calendar year, the EU were to only consume fish from its own waters, 8 July would be the date that it would effectively run out of fish – making it wholly dependent on imports from 9 July onwards (based on current levels of consumption).

At a time of uncertainty in the fishing industry – stemming from factors like the unknown impact of climate change on fish stocks, rising fuel prices and fewer public resources for government – our best guarantee of a stable and sustainable future for the sector is to restore our fish stocks. 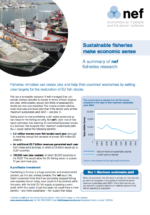