The Government is about to commit £33 billion to a single high speed rail project – the largest transport investment in UK history. But is this the best use of taxpayers’ money? Other transport investments could outstrip High Speed 2 on value for money and perform better against the scheme’s objectives, but as yet they are unexplored.

The Department for Transport (DfT) has omitted a vital step in what should be a fair, transparent and prudent appraisal of the proposed High Speed 2 (HS2) rail line: it has failed to explore alternative options. At no point in the process have alternative ways of spending the £33 billion HS2 budget even been considered, let alone properly appraised against the scheme’s objectives. We understand these to be:

Uncertainty around whether HS2 will actually meet its objectives is growing; it is vital that we have an open, informed debate on the scheme. That is why nef has developed an example of an ambitious, alternative transport investment package that, for £33 billion, could bring as many or more benefits as the new high-speed rail link. Compiled through interviews with transport experts, as well as a detailed review of government and academic literature, our package contains a total of 88 individual investments, falling into the following categories.

As our alternative package demonstrates, we don’t necessarily have to spend the entire £33 billion currently earmarked for HS2 on one make-or-break scheme. It’s possible that spreading the capital across many diverse projects, in a way that is responsive to local as well as national needs, could reap much wider economic, social and environmental dividends.

Something fundamental has been lost in the HS2 debate. The point of any investment is to meet needs or goals; these are what determine why and how we invest scarce funds. The concern with HS2 – the biggest transport investment in in UK history – is that the means (HS2) have overshadowed the ends (economy, environment and rail capacity), with no assurance that the two are truly connected. There could be better ways to meet our national goals, and as custodian of our public funds the government must step back from unsubstantiated rhetoric on HS2 in order to explore and assess these opportunities properly. 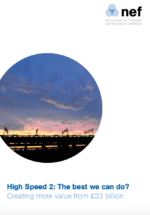