How young people at the Roundhouse shape each other’s experience

Creative programmes that bring people together from diverse backgrounds benefit participants, the arts, and society at large. At the Roundhouse, a London-based arts organisation, creative opportunities for young people are acting as social levellers and enriching the experiences of the young people they engage.

The Roundhouse is an arts organisation and performance venue which offers 11 – 25 year olds opportunities to participate in projects, performances or engage in a range of volunteering or work-related activities in addition to independent hires of studio spaces. The creative programme focuses on three broad discipline areas Broadcast and New Media, Music and Performing Arts. The primary aim of the creative programme is to nurture talent, broaden horizons and inspire all young people to have a life-long engagement and appreciation of the arts, be that as an audience member, participant or part of the creative industries workforce.

The creative programme at the Roundhouse spans a broad range of activities, for example work with schools, targeted projects for vulnerable young people, and an open access or universal offer where young people can independently subscribe to projects at weekends and in the evenings throughout the academic terms and in holiday periods.

This report is the result of independent research into the benefits of the open access or universal programme for young people. It explores the nature and experience of diversity and social integration through this programme which is situated at the heart of the Roundhouse approach and is designed to be accessible to all young people regardless of their personal circumstances, means or background. The Roundhouse works to ensure accessibility in a number of ways including by keeping project fees relatively low, offering a bursary scheme to help cover fees and travel expenses and by offering drop-in taster sessions.

Analysis of the Roundhouse intake revealed positive achievements in terms of diversity. The intake to the term-time open access programme in autumn 2012 was broadly 50:50 according to gender, with a spread across age groups, and cultural origin. As a proxy for economic advantage or disadvantage, the Roundhouse monitors participants’ geographical location by postcode. Our review revealed that residential areas represented varied from high to low income deprivation, reflecting Roundhouse efforts to ensure inclusivity regardless of means.

How do young people at the Roundhouse experience diversity?

Young people taking part in the open-access programme had extremely varied understandings of diversity, with no strong patterns emerging along traditional lines of gender, ethnicity or class. Participants were more aware of other aspects of diversity at the Roundhouse and in their lives generally, such as personality types, artistic tastes and personal styles.

The participants also differed according to the ease with which they felt they could locate class identity for themselves and for others. It was evident that class is often closely related to cultural practices in some sense distinct from economic means (although these aspects may be linked). Class is also a fluid concept; some young people were not able to locate themselves as easily as they transitioned to adulthood and began to distinguish their own situation from that of their parents.

Social levelling is leading to better outcomes for participants

Perceptions of diversity experienced at the Roundhouse demonstrated that it is functioning to an extent as a social leveller in accordance with its objectives. The majority of participants spoke about the positive effects of being part of a diverse group, with personal, creative, social and political benefits borne of greater exposure, understanding, insight and appreciation. A few actively felt that judging the extent of class diversity that they experienced at the Roundhouse was irrelevant, that not knowing – or caring – was positive, and indicated how the environment was more level than others they had experienced.

The journeys and related outcomes for young people fell into five categories: increased confidence, increased tolerance, friendship, technical accomplishment and fulfilling dreams. All related to some degree to the diversity and inclusivity that the young people experienced at the Roundhouse. For example, mixing with different people enabled experimentation with new ideas, which was a contributory factor in increasing confidence in some cases. Likewise, participating in a diverse group at the Roundhouse helped overcome previous isolation, with friendships sustained beyond the project itself.

As part of the research we measured ten key areas of individual progress, comparing responses at the beginning and end of the autumn 2012 programme. Statistically significant changes between scores recorded before and after the course were obtained in two of these areas:

These outcomes speak of greater confidence, relationship skills and optimism for the future, and this was confirmed via interviews with alumni of the Roundhouse. They spoke about how the Roundhouse had been instrumental in helping them develop social and technical skills and understanding the workings of (and opportunities available in) the creative industries, which had helped their careers and raised aspirations.

Key outcomes of a universal offer

This research provides qualitative evidence of the successful, collaborative and diverse environment provided for young people at the Roundhouse. It uncovers evidence for two main outcomes resulting from the venue’s inclusive approach:

By avoiding any reinforcement of personal, social or economic dividing lines this universal approach generates valuable outcomes for individual participants, the arts, and society at large. 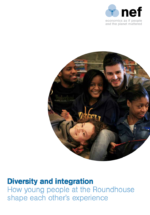