Tackling economic inequality is not a by-product of fighting poverty and climate change – it is a key ingredient. A more equal world by 2030 would dramatically reduce the number of people living in extreme poverty, and better brace us to mitigate and adapt to environmental shocks. So why is the issue being sidelined in global talks on which Sustainable Development Goals (SDGs) should head up international development efforts post-2015?

The 2015 endpoint for the UN’s Millennium Development Goals (MDGs) is fast approaching, and with it a vital opportunity to review and refocus global efforts to fight poverty and environmental decline. But as the international community debates a new set of SDGs to anchor international development efforts up to 2030, something crucial is being overlooked. A standalone goal on reducing economic inequality has been excluded from the final list of potential SDGs.

Expert consensus couldn’t be clearer on the corrosive effect of economic inequality on health, social cohesion, economic growth, education and crime. Forecasts show that, without narrowing the gap between the richest and poorest in our societies, other attempts to fight poverty and stabilise the environment could be fatally undermined.

The international community previously placed greater equality at the heart of the post-2015 development agenda: at the Rio+20 summit in 2012 ​‘inclusive and equitable economic growth’ was enshrined as one of three key dimensions of sustainable development that the SDGs must address.

But the New Economics Foundation (NEF) review of proposals emerging from the post-2015 process and the SDGs discussions to date reveals that this focus has drifted. While action to reduce horizontal inequality within populations (for instance, as a result of gender and ethnic discrimination) is rightly supported, the proposals stop short of tackling vertical economic disparity across whole populations. This is a major oversight given the far-reaching costs of economic inequality and suggests that the principles set at the Rio+20 summit are not being observed.

There is also a tendency among the consultation documents to assume economic inequality will be resolved as a side-effect of tackling other targets. One popular approach advocates disaggregating progress towards SDGs by gender, ethnic, religious and income groups as well as by region, and only considering goals achieved if they are met by all population groups. Others propose universal targets, such as ​‘universal access’ to healthcare or ​‘zero’ hunger, as a way to ensure progress is common to all groups.

Ensuring basic needs are met for all is crucial for progress on human rights. But without a dedicated push to address economic inequality we risk replicating the conditions that drive poverty and environmental destruction. The UK – a developed country with universal healthcare and education but endemic problems of deprivation and over-consumption – is a case in point.

Measuring progress towards an SDG on economic inequality

A common justification for the absence of goals and targets on economic inequality is that it cannot be robustly measured. But this is simply not the case. In this report, NEF has developed criteria to select indicators and found several possibilities for how progress towards a more equal world could be measured.

The Palma ratio – a measure of the proportion of gross national income (GNI) accrued the top 10% versus the bottom 40% – scored highest among the experts we surveyed, providing an easy to understand and statistically robust measure of income inequality. If adopted, this should be supplemented with at least two other indicators. We suggest:

Significant gaps in data collection would need to be addressed in order for all countries to robustly calculate inequality measures like the Palma ratio. Therefore, as part of the post-2015 framework, it is vital we invest further in data retrieval and synthesis so that measurement does not block progress.

We advocate that country-by-country targets for inequality reduction should initially be set at the national level through public consultation, as a means of fast-tracking their adoption without the need for lengthy United Nations (UN) negotiations over a universal target. This approach would also encourage public debate and ownership of the target.

The self-perpetuating nature of economic inequality means that the longer we ignore it, the harder it will be to reverse. A dedicated SDG would give governments the push they need to start monitoring economic inequality within and between countries, and creating policies to close the gap. We cannot afford to let the problem grow unchallenged and compromise the success of post-2015 international development efforts. 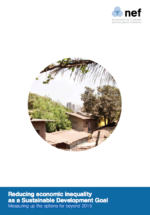