A Wellbeing Manifesto for a Flourishing Society

One of the key aims of a democratic government is to promote the good life: a flourishing society, where citizens are happy, healthy, capable and engaged – in other words with high levels of well-being.

But in prioritising economic growth at all costs, government has lost sight of this ultimate aim. This manifesto seeks to put well-being back at the centre of policymaking.

Should growing the economy be the Government’s most important role? Or should on government to help UK citizens be happier and more fulfilled – not richer and more depressed.

This report shows what the Government’s manifesto might look like if policy was driven by improving well-being, rather than increasing income. One of the key aims of a democratic government is to promote a better life for its citizens. While many policies tend to focus on enhancing people’s incomes by expanding the economy, this has not tended to result in higher levels of well-being. In fact, while GDP has nearly doubled over the last 30 years, measures of well-being have remained static.

“The impression, which slowly dawns on one as one reads this manifesto, is that, if this is all true, then really what we’re facing is the need for a significant revolution in the way we organise just about everything in our society. Unlike most previous calls to revolution, this one proceeds logically, calmly and remains always grounded in an appeal to that thing we all care about in a very deep and uncomplicated way: happiness. I can’t commend the work highly enough.”
- Alain de Botton, author and philosopher 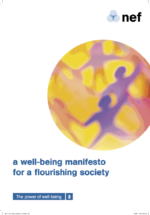