By running three public dialogues on wellbeing in policy, this project found that the public were interested and engaged with wellbeing, and that the wellbeing lens enabled them to really consider what matters to them. This has the potential, not only to deliver better policy, but also to reconnect people to the policy-making process in a meaningful way.

Since 2010 the government has made great strides in measuring population wellbeing. The question now is how to use that data, and other evidence on wellbeing, to create better policies.

This project aimed to involve members of the public in doing just that. In order to achieve these aims, we ran three public dialogues in each of which members of the public were presented with a policy challenge, and asked to consider high wellbeing solutions. We recruited a range of people of different ages and backgrounds who would be affected by each policy area. For each policy area we held two, three-hour workshops in two areas of the country. The project was lead by NEF with Hopkins van Mil, and funded by the Cabinet Office and Sciencewise.

By bringing together the wellbeing and open policy-making agendas we hoped to strengthen both. We found that introducing a wellbeing lens helped participants engage with the policy issues in a meaningful way, enabling clearer and deeper focus on what really matters to them.

In particular, participants were able to use the wellbeing lens to challenge the assumptions underpinning the policy design and in some cases the objectives. This allowed them to make quite broad suggestions for changes to policy priorities.

We therefore recommend that where possible, wellbeing is introduced in public dialogue at an early stage of the policy cycle, when challenging objectives and assumptions is most useful, though it can also have value with other engagement techniques at later stages of the cycle.

Based on consideration of the wellbeing evidence, dialogue participants came up with suggestions on the three policy questions posed to them.

Increasing the incomes of low earners

The Department for Work and Pensions (DWP) were interested in how a better understanding of wellbeing may help them design policy to encourage and support low earners to increase their incomes.

The Cabinet Office’s Social Action Team were interested in how to reduce loneliness in communities.

Increasing the uptake of community rights

The Department for Communities and Local Government (DCLG) were interested in what would encourage more people to consider exercising their community rights, or take control of decision-making in their communities in other ways.

Download the appendix to read the full dialogue findings 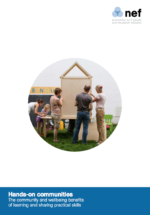