Tackling inequality and poverty at root in Northern Ireland

Northern Ireland (NI) is at a crossroad. The economy was badly hit by the financial crisis and is emerging from recession more slowly than the rest of the UK.

The UK government’s austerity programme has created further difficulties for NI. There is now an opportunity to rethink the direction of NI’s labour market and economic policy. We recommend that this involve a new focus on the creation of good jobs – those which provide a decent wage as well as decent quality work. We believe this is needed to address the root causes of poverty and inequality in NI.

How the labour market is driving poverty and inequality in NI

We found that the labour market is driving the entrenchment of poverty and inequality in NI (Section 1). Poverty is increasingly affecting both those who are out of work and those who have jobs. While the number of top professional jobs has increased, mid-level jobs have been lost, real wages overall are falling and there is an increasing amount of low-waged work.

Our review of current policy (Section 2), found some successes in addressing poverty, inequality and its drivers, but we also identified significant gaps. We suggest that these gaps arose because the overall approach has been to target growth and then rely on redistribution to address inequalities – as opposed to building concern for inequality into growth initiatives from the start. Focus has tended to be on inequality between groups defined by religion or gender, rather than overall economic inequality. We also found that while many initiatives have focused on increasing the number of jobs and upskilling workers, there has been little attention to the quality of jobs.

Our recommended approach for addressing poverty and inequality at root

Based on our review of current and historic policy, we identified two critical areas for further development:

Achieving good jobs for all

Good jobs are at the heart of a successful economy because remuneration for work provides the major source of livelihoods for most households. Given the decline in the number of mid-level jobs and the rise of in-work poverty, policymakers need to aim for higher quality jobs, as well as a greater quantity of jobs.

Achieving this aim requires a commitment to making all jobs good jobs, from high-paid, knowledge intensive sectors such as technology, to useful and necessary jobs in sectors such as care and retail.

We explored a selection of policy measures which could be developed and implemented in NI, to deliver results immediately. We have grouped possible interventions under three headings.

In addition to designing new good jobs, it’s necessary to rethink existing poor-quality jobs to turn them into good ones. The measures we recommend are:

As well as thinking about the design of good jobs, we suggest ways in which to stimulate investment.

By shifting the priorities of enterprise it is possible to incentivise employers to sustain quality employment on a wide scale. We recommend an examination of support mechanisms for alternative ownership models as follows:

Policies for achieving good jobs in NI as a priority. However, it will be difficult to re-orientate national and local governments to the good jobs approach as long as the key headline indicator of progress is growth. Although the Northern Ireland Composite Economic Index (NICEI – NI’s equivalent to GDP) will remain an important measure, we recommend the development and implementation of a more rounded set of headline indicators to better capture societal progress and to send strong signals about priorities. This will be in line with the widespread and high-level acceptance in the UK and elsewhere that growth is too narrow a goal for economic policy. This will not only help NI citizens hold policymakers to account on what really matters, but could also help build a consensus around the direction of policy. 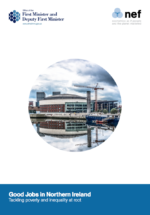