Looking through the wellbeing kaleidoscope

Results from the European Social Survey

The ultimate aim of policy making should be to improve people’s wellbeing. Drawing on evidence from across Europe, this report explores new ways in which policy can support and encourage high levels of wellbeing, using data from the European Social Survey.

Much of the established evidence and analysis around wellbeing is based on a single measure – life satisfaction. This report combines contributions from City University London, the New Economics Foundation (NEF) and the University of Cambridge to explore new ways of understanding and measuring wellbeing. It looks at the following:

This new single score was created by combining measures of ten different aspects of wellbeing (competence, emotional stability, engagement, meaning, optimism, positive emotion, positive relationships, resilience, self-esteem, and vitality) to give a richer and more nuanced picture of people’s wellbeing. Using this approach offers a more robust and accurate understanding of overall wellbeing, It also provides invaluable information for policy makers aiming to improve wellbeing, as it allows them to identify those areas specifically in need of improvement.

Examining specific aspects of well-being provides insights beyond a single indicator. For example, the UK ranks 8th out of 21 countries in terms of optimism, but is 20th of 21 in terms of sense of vitality.

Using the comprehensive measure, wellbeing has generally increased, perhaps surprisingly, from 2006 to 2012, with the percentage of the population with high wellbeing increasing in every country.

The greatest variations in the levels of wellbeing occur among countries and groups where average wellbeing is also the lowest.

The greatest opportunity to improve well-being in a country is to begin with those with the lowest wellbeing, particularly unemployed and older individuals, through population-relevant interventions.

By analysing inequalities in life satisfaction across Europe and over time, we find:

Large differences in wellbeing between population groups are not inevitable: Although those of an ethnic minority, on low incomes or with low education often have lower average wellbeing, this is not always the case, with some countries showing almost no difference. This suggests that policy could aim to reduce or eliminate these inequalities.

Economic factors drive inequalities in wellbeing: Most notably, a country’s unemployment rate is strongly associated with higher levels of inequality in wellbeing.

Good governance may be one of the best ways of reducing wellbeing inequality. Having low levels of corruption and high levels of voice and accountability, for example, are associated with lower inequalities in wellbeing. This effect goes above and beyond the effect of governance on unemployment or economic growth.

The five ways to wellbeing are a set of actions that evidence suggests promote wellbeing. They are: Connect, Be Active, Take Notice, Keep Learning, and Give.

We explored who is and who isn’t participating in the five ways, in order to suggest ways of boosting involvement.

With the exception of those aged 65 and over, the UK generally had low levels of participation in the five ways, when compared to countries such as Germany or France. Two key findings were:

Young women (15 – 24), parents, and people doing housework or childcare in the UK reported very low rates on Take Notice (whether people take notice and appreciate their surroundings). This finding was not replicated across Europe, suggesting there may be particular barriers in the UK for these population groups which may be amenable to policy.

People of working age in the UK connected socially less than their European peers. This suggests that this age group may need particular attention, contrasting with existing policy approaches which often focus on the young and the old.

What are people’s assessments of the key institutions in society: their trust in the police, politicians, parliament or legal institutions, or satisfaction with public services, government, the economy, or democracy in their country? By measuring this Perceived Quality of Society (PQOS), we find that:

The more marginalised groups in society – women, those who claim membership of a discriminated group, and those with lower education – have a more negative view of these institutions. Those in middle aged groups (25 to 64) also have more negative views. This suggests that our democratic and legal institutions may need to do more to engage with these groups.

Democratic satisfaction is consistently higher than satisfaction with the economy and the government in the UK, with a similar pattern elsewhere in Europe

Nearly all countries exhibited a considerable dip in economic satisfaction in 2008, at the height of the recession, although this dip was particularly pronounced in the UK.

There are marked regional inequalities in PQOS within the UK, with London and the South East having high levels of economic and governmental satisfaction compared to other regions, particularly the Midlands. 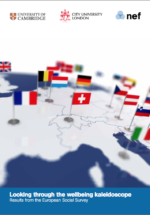