Who controls the new £1 coin?

The new 12-sided £1 coin launches tomorrow – the first change to the familiar design in more than 30 years. The old round pound is valid up until 15 October, after which they will become worthless.

It won’t be long until you have a new coin or two in your pocket. But where does new money come from, and who actually controls it?

A license to print money

Metal coins are produced under the authority of HM Treasury by the Royal Mint. It is estimated that there are currently around £4 billion worth of coins in circulation, and the Royal Mint has created 1.5 billion new £1 coins.

The other form of physical money is paper notes. These are created under the authority of the Bank of England and printed by specialist printer De La Rue. It is estimated that there around £68 billion worth of notes in circulation.

Because money costs very little to produce, but commands a high value in the economy, creating new money is a profitable business. A £10 note costs just a few pennies to print but can be used to purchase £10 worth of goods and services. Those who are permitted to create new money therefore have a privilege not enjoyed by anyone else in the economy.

Historically, issuing money has been a royal prerogative, and the resulting purchasing power accrued to the seigneur or ruler. The revenue earned from the issuance of new money – the difference between the purchasing power and the cost of producing the money – was referred to as seigniorage.

Because the cost of producing coins is quite high relative to the face value, the amount of seigniorage generated from coins is very limited. But banknotes are a different story: since 1990 the Bank of England has transferred £36 billion of seigniorage profits to HM Treasury, which has been used to support day-to-day spending priorities. 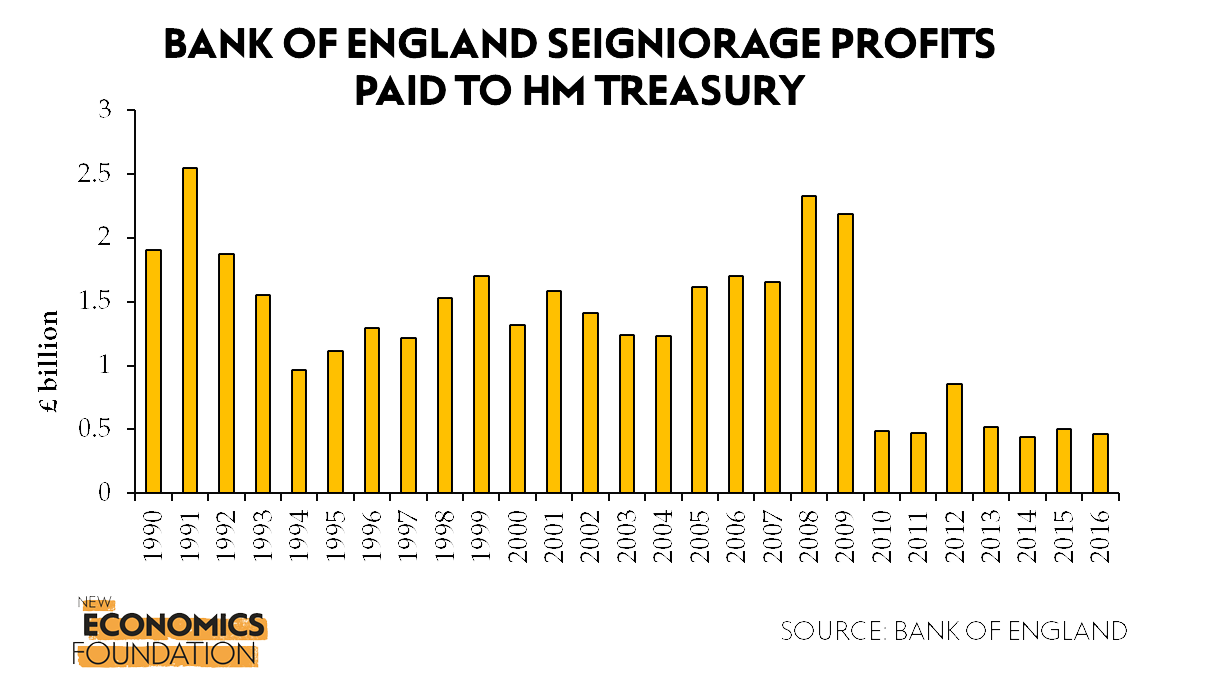 There’s more to money than cash

But this is only part of the picture. In modern economies, coins and physical notes only make up around 3% of the total money supply. The remaining 97% is electronic bank deposits, or the money that is in your bank account. Whenever you make a purchase in a shop using your debit card, you are doing so using bank deposits.

This type of money is not created by the Bank of England, the Royal Mint, or any other part of government. Instead, it is created by commercial banks such as Barclays, Lloyds, RBS, and HSBC.

The process by which bank deposits are created has long been a source of confusion. Part of this stems from a common misunderstanding of what banks do. A prevalent view among the general public and some economists is that banks are financial intermediaries that take money from savers and lend it to borrowers. Another general view is that banks borrow central bank reserves from the central bank and then lend them out to the public. Both views, however, are incorrect – as was recently confirmed by the Bank of England.

The reality is that banks create new money in the form of bank deposits when they make new loans. If you take out a new mortgage from a bank, the money is not taken from someone else’s savings, nor is it taken from the bank’s own reserves. Rather, the bank simply creates the money electronically via the keystroke of a computer and credits your bank account with additional deposits. When banks issue new loans, they expand both sides of their balance sheet simultaneously, creating an asset (the loan) and a liability (the customer’s deposit in the bank account).

Although cash is still used widely, if households and businesses want to use electronic money and access the payments system they must hold their money in the form of electronic bank deposits. Because these deposits are created by commercial banks – not by the government – all of the seigniorage profits arising from the creation and use of electronic money has been captured by big banks.

We recently calculated that this has amounted to a hidden subsidy of around £23 billion per year. This suggests that a large proportion of banks’ profits are underpinned by their control over the money supply, an essential piece of public infrastructure. Meanwhile, the government is forced to borrow at interest from the private sector when it wishes to spend more money than it receives from taxation.

Introducing central bank digital currency could allow the state to recapture some of the seigniorage that currently accrues to the commercial banking sector by providing a competing form of electronic money to bank deposits. This would enable the government to spend more or borrow less from the private sector.

It would also give central banks an additional policy tool to help boost demand when interest rates are already very low. For example, the central bank could directly credit the accounts of households enhancing consumption or enabling households to reduce debt overhang – so called ​“helicopter money” which has been proposed by a number of notable economists. It might also enable greater financial inclusion, by providing access to digital payment platforms for everyone.

While the future of our pound coins could be digital, there’s certainly no harm in enjoying the new 12-sided coins while they last. But most importantly, make sure you spend your old round pounds before 15 October – they’ll end up worthless regardless of who controls them.