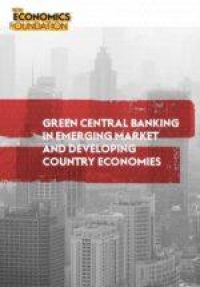 Central banks have played an increasingly prominent role in advanced economies over the last decade. They have created new money on a huge scale with quantitative easing programmes, forced banks to hold more capital, and begun constraining credit to certain sectors of the economy. Yet none of these policies have taken into account the urgent challenge of climate change and the need to shift our economies to a low-carbon trajectory. This is despite the accepted fact that there is still a huge carbon-finance gap to be filled and that climate change poses major financial stability risks.

In emerging and developing countries (EMDCs), however, the story is different. Here, in many cases, central banks have begun to play an important role in addressing the risks posed by climate change and the need for green investment.

EMDCs are more exposed to the immediate challenges of climate change. Many face greater physical risks, including more frequent, climate-change-related, severe weather events. They also recognise the need to rapidly shift their economies on to a sustainable ​‘green growth’ path for their future prosperity and energy security. Excluding China, around 70% of global projected sustainable infrastructure investment needs ($3.5 – 4.0 trillion per year on average) will be required in EMDCs.[i]

In contrast to advanced economies where central bank mandates are predominantly focused on price stability, many of the central banks in EMDCs have a wider remit to support sustainable development and the government’s economic policy agenda. Three different categories of intervention are regularly used in these countries to address the challenge of green finance and climate change:

With regard to green growth and credit allocation, existing traditions of financial intervention shape the country’s approach. Central banks that have in the past been engaged in centralised credit allocation policies – India and Bangladesh most obviously – have added categories to their existing priority loan programmes for green projects, in particular renewable energy projects. In Bangladesh, for example, it is estimated that around 10% of the population has been supported by the central bank’s green refinancing programme in installing home-solar power systems.

In other countries, such as South Korea, Brazil, and China, national development banks have played a more important role in supporting credit to green sectors with the central bank focusing more on suppressing credit to brown sectors. In Brazil, the central bank requires commercial banks to stress test their lending against environmental and social (E&S) risk criteria and hold additional capital against these risks. In most countries, however, green macroprudential policy is still in its infancy, although it is increasingly recognised that climate change poses systemic financial risks.

There are also a wide range of different policy initiatives in which not only the central bank, but also other financial regulatory institutions play a central role. Green guidelines of various types have been issued in nearly all EMDCs we examined. Green bonds are taking off in several countries, often with the support of the central bank, including China, India, and South Korea. In general, the more successful green finance initiatives tend to address several aspects of the financial system, including E&S risk management, green bond markets, retail banking, and insurance.

Inter-agency cooperation also appears to be an important factor. China’s Green Credit Policy has involved collaboration between the central bank and the Ministry of Environmental Protection to create a national database which records the environmental compliance of non-financial firms. Banks are required to restrict loans to firms that violate environmental compliance rules. Countries, such as Indonesia, where one agency alone has the responsibility for green financial policy, tend to have a weaker record of implementation.

Assessing the implementation and impact of green financial policy in the countries of interest has been challenging. In some countries, governmental institutions have issued comprehensive regulation, guidelines, or policy roadmaps, but have failed to present evidence of the implementation and impact of their green initiatives. Recent green initiatives have been mostly market-led and not policy-guided, with rather disappointing results, as private markets have remained risk averse in the face of policy uncertainty.

In other cases, however, central banks have taken action to improve things. For example, the Reserve Bank of India was criticised for its definition of renewable energy projects and the Chinese banking regulator was also criticised for shortcomings in its definition of green credit. In both instances, the institutions responded and implemented new measures as a result. This illustrates that green finance is likely to be an exploratory policymaking process – where policy platforms can be gradually built upon over time.

In general, central banks and other regulatory institutions in our case studies are seriously engaged in green finance issues to a greater extent than central banks in advanced economies. Now that it is recognised that private markets in both advanced and EMDC economies are not investing sufficient financing in green infrastructure and green innovation, there may be valuable lessons for advanced economies to learn from the early experiments in green central banking reviewed in our case studies. We hope that this report aids knowledge transfer and engagement both between EMDCs and between them and advanced economy monetary policymakers and financial regulators.