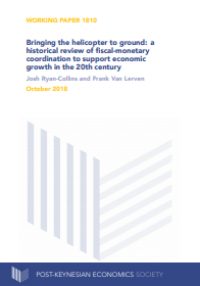 In the face of the perceived high public and private debt levels and sluggish recovery that has followed the financial crisis of 2007-08, there have been calls for greater fiscal-monetary coordination to stimulate nominal demand.

Policy debates have been focused upon the inflationary expectations that may be generated by monetary financing or related policies, consistent with New Consensus Macroeconomics theoretical frameworks. Historical examples of fiscal-monetary policy coordination have been largely neglected, along with alternative theoretical views, such as post-Keynesian perspectives that emphasise uncertainty and demand rather than rational expectations.

This paper begins to address this omission. First, we provide an overview of the holdings of government debt by both central banks and commercial banks as an imperfect but still informative proxy for fiscal-monetary coordination in advanced economies in the 20th century.

Second, we develop a new typology of forms of fiscal-monetary coordination that includes both direct and less direct forms of monetary financing, illustrating this with case-study examples. In particular, we focus on the 1930s-1970s period when central banks and ministries of finance cooperated closely, with less independence accorded to monetary policy and greater weight attached to fiscal policy. We find a number of cases where fiscal-monetary coordination proved useful in stimulating economic growth, supporting industrial policy objectives and managing public debt without excessive inflation.