We can afford it. We can't afford not to. 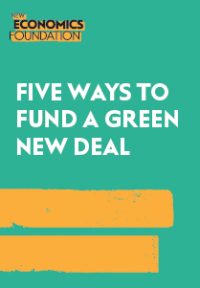 Momentum is building around a Green New Deal – an idea first developed by NEF and others in 2008, and now adopted by a growing number of movements and political parties around the world, including in the UK.

The Green New Deal would be a major, government-wide mission to respond rapidly to the climate emergency through a programme of state-led investment in a new generation of good jobs in clean industry, business and infrastructure – in particular targeted at the people and places that most need a ​‘just transition’ to a new economy.

It’s a plan that meets the scale of the climate crisis head on. We need ambition to properly respond in a socially just way to the imperative of climate breakdown. It places the state firmly at the heart of the climate response, in a way we have almost forgotten how to do after decades of neoliberal economic policy.

Inevitably, as with all ideas that change the rules of our economy, some people will accuse it of costing too much. But there’s no question that we can and should fund this type of investment.

All investment costs money, but our economy needs huge investment and we can afford it. And unlike the kinds of high carbon spending we have made for decades, funding a Green New Deal will be a win-win: good for both people and the planet.

We can afford it. We can’t afford not to.

The world has a handful of years to act on the climate emergency. The UK is keen to be seen as a leader on the global stage, but is way off pace at home. The UK government is committed to delivering ​‘net zero’ emissions by 2050, but Labour and the Green Party have already pledged to bring this date forward to 2030.

A programme like the Green New Deal is essential to marry radical climate action with social justice and the rebalancing of the economy. When wars need to be fought, or banks bailed out, governments do not hesitate to find the money.

The government’s total annual spending is around 38% of GDP per year. Spending on the climate emergency each year only needs to increase to 2% of GDP in the short term, ramping up to 5% to deliver change at pace. Former Chancellor Philip Hammond attempted to criticise the new ​‘net zero by 2050’ target by saying that it would cost ​“more than £1 trillion”. This was a one-sided estimate that ignored the multitude of jobs, innovation and resilience it would unlock – and which in any event represents only 1.5% of GDP over that period.

Governments can borrow very cheaply; the money they have available to spend can be increased by the things they spend money on, through higher tax receipts; and they can if needed rely on central banks for help. Provided their spending supports productive investment – the cornerstone of the Green New Deal – any arguments against borrowing are based on political ideology rather than economic fact.

This pamphlet sets out five of the ways we should fund the Green New Deal:

The Green New Deal must be led by democratic choices. This requires greater state involvement and a much bigger role for direct government investment.

That certainly does not mean that there is no role for the private sector in delivering the Green New Deal – far from it. The Green New Deal’s headline ambitions and determination to guide innovation and investment towards a clean and fair economy will help provide the certainty to private investors that they have been lacking after many years of half-hearted government climate policy.

But private markets will not deliver the social justice that is integral to the Green New Deal and the delivery of a just transition. Markets alone have little incentive to support the workers, communities and places whose livelihoods would be most directly affected by a poorly managed transition away from high carbon work. The more that the private sector is left to finance the transition to ​‘net zero’ without stewardship, the greater the risk that the costs of the transition will fall on the less well-off in society – for example through higher everyday energy bills. In other words, without the approach of a Green New Deal, the low-carbon transition risks increasing inequality.

However the ​‘five ways’ that we set out in this pamphlet are about simultaneously ramping up the leadership and economic role of the state whilst also setting a clear and supportive framework for private investment as well.