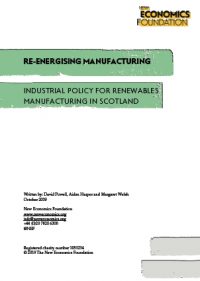 Scotland is uniquely placed, given its abundance of renewable resources, to continue to expand its production of renewable electricity. The nation has seen rapid growth in renewable energy over the last decade, principally from onshore wind. Approximately 4,500 full-time equivalent manufacturing jobs are supported by the low-carbon and renewable sectors in Scotland. In many ways renewable energy is a success story for the Scottish economy and will continue to be so.

The coming decades will see demand for electricity continue to grow while existing renewable energy sites will need to be upgraded and replaced. Scotland could cement its position as a net exporter of clean energy to the rest of the UK, and the Scottish Government’s support for a Green New Deal – which would use the full levers of the state to deliver public investment in green jobs – could be a major boon to the country’s domestic manufacturing sector.

But far more of the economic value of the supply chains of renewable energy installed in Scotland could be retained in Scotland. The UK’s historic approach to both energy policy and industrial strategy more broadly has undermined domestic supply chains. Scottish industry is competing with companies based where energy skills and renewable supply chain development have been taken seriously for years, or are competing against overseas state-backed companies. Unions point to an overall trade deficit in Scotland’s low carbon and renewable sector.

The Scottish Government should match its aspirations to be a world leader on climate action with more direct support for domestic manufacturing for its future renewables growth. This means acting both to keep domestic demand high and also to support supply chains from Scottish industry. Business as usual will not suffice; no matter what type of manufacturing the government might seek to support, it is going against the headwinds of the UK’s economic model over the last 40 years, where laissez-faire economic policy, many decades of a lack of genuine industrial strategy, and the retreat of the state from directly supporting keystone industries, is coming home to roost.

Support domestic demand for renewables for the long-term. Scotland’s domestic renewable energy target should be expanded from the current 100% to 200% of its needs by 2030. This target should be supported by sub-targets for specific sectors such as tidal and marine energy (ie, 1GW installed capacity of tidal energy by 2030) with grant funding provided to support deployment to that level. As Scotland does not control the subsidy (Contracts for Difference) regime it must continue to pressure Westminster to ensure the regime does not discriminate against small-scale renewables or onshore wind, and to attach local content requirements as a condition for the receipt of national subsidy.

Stimulate local supply of domestic content. Conditions should be set for local content in all areas that the Scottish Government controls – for example, the operation of the Crown Estate, which licenses the sea bed for offshore wind, is devolved to Scotland. Ministers should establish a centre of excellence skills programme for manufacturing, and extend and strengthen the remit of the planned Publicly Owned Energy Company to enable it to directly support energy supply, generation, and distribution, as well as supporting local cooperatives and smaller companies.

Localise industrial strategy. More powers should be given to regions and localities to set out financed plans for local industrial transformation, via processes that are more democratic than those led by Local Economic Partnerships.

Provide supportive finance. The Scottish National Investment Bank must be given a coherent ​‘Green New Deal’ mission that aligns it to the work of the SEDA. Its mandate must specifically ensure it can support the development of Scottish supply chains in low-carbon industry and that its lending is consistent with delivering a ​‘just transition’. Representatives of manufacturing, including trade unions, should form part of the Bank’s board.