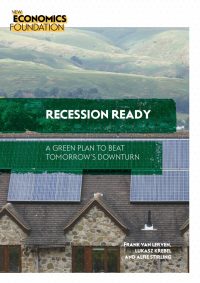 Failure to respond to the last recession by scaling up investment in a socially just way to tackle climate breakdown was a missed opportunity. Austerity saw vital public services and investment cut back after 2010, prolonging economic pain, increasing inequality and suppressing average living standards by up to £3,600 per year. But worse still, failure by governments to fund a cleaner, zero-carbon economy after the recession, has left a permanent scar on our planet. Not enough investment was brought forward in the crucial months after the recession.

Green public investment was cut back after 2010, while money was found for tax cuts that benefited the richest households more than anyone else. New analysis for this report shows that had £10.5bn — only a third of the funds used to pay for the coalition government’s cuts to income tax and corporation tax between 2010 and 2013 — been used instead to fund a mass home insulation programme, residential emissions would have been reduced by 30% by 2018. This is about a third of current emissions from the UK’s power sector.

Ten years on, the government is now faced with two considerable policy challenges. The first is the alarming lack of progress in reducing UK carbon emissions to meet the UK’s climate goals. As a global community, we now have just over a decade to limit global temperature rises to a maximum of 1.5°C above 1990 levels, beyond which we risk crossing ​‘tipping points’ that could lead to catastrophic and potentially irreversible damages. The economy is thought to be behind on 17 of its 24 key indicators of progress towards emissions targets; short-term carbon budgets have largely been met due to temporary events outside of domestic policy control.

The second policy challenge is the current vulnerability of the UK economy to the next recession and the potential powerlessness of monetary policymakers to aid a recovery. The likelihood of another recession is now higher than at any time since 2007 – the most recent forecasts claim there is a 30%-40% chance of a recession within the next few months. Perhaps more worrying still is that policymakers are desperately ill-equipped to repel the effects of recession. The depth of the 2008 financial crisis, and the damage caused by austerity since then, has meant that monetary policy has been unable to lift interest rates above their effective lower bound – a point beyond which further reductions have little or no positive effect on spending in the economy. Meanwhile, although the so-called automatic stabilisers – social security payments and progressive tax – would still provide a substantial cushion during the next recession, a decade of welfare cuts and freezes has left the UK safety net significantly less effective than the one in 2008. If left unreformed, the poorest will be more vulnerable to the effects of recession than ever before.

These two separate challenges are becoming increasingly well recognised, not only among the more heterodox economists who first identified them, but among mainstream economists and policymakers as well. More than 10 years on from the last UK recession, this report seeks to echo the argument made by the New Economics Foundation (NEF) and the Green New Deal Group more than a decade ago: that both challenges demand a single, common solution. The policy response to the next recession should contain within it the largest green stimulus in zero-carbon infrastructure that is feasibly possible.

Based on an analysis of past recessions and projects for future downturns, this report identifies the key criteria – such as with regard to the length of required lead-in time, the ability to enable future green investment, and the size of impact on economy-wide spending, among others – that should be used to build projects for an effective green stimulus package. We then use these criteria to assess the future pipeline of green infrastructure projects in the UK, which are required to meet climate targets on time. Based on this analysis we recommend priority areas that policymakers should target for an expansion of green infrastructure during recession.

To illustrate the macroeconomic shape and effects of the type of green stimulus we propose, we also conduct a high-level feasibility analysis across each of our priority investment areas to set out the indicative fiscal stimuli that could be used in response to either a moderate or a large recession during the first half of the 2020s. Table 0.1 summarises the possible size and composition of these green stimulus packages.

Table 0.1
Illustrative, 3 – 4‑year green stimulus for different types of recessions during the early 2020s
Figures % of level GDP following a recession unless otherwise stated and cumulative over 3-4 years

We also model the effect that an overall green stimulus might have on UK public borrowing, debt, and financing costs. In addition to the green infrastructure spending, these stimuli would also need to contain a suite of other discretionary measures, such as increases in unemployment benefits and cuts to consumption taxes. Our analysis shows that debt would be even higher as a proportion of GDP without a green stimulus package, partly because of lower GDP and partly because of higher borrowing due to higher welfare costs and lower tax receipts. Despite a green stimulus resulting in rising debt, the peak in overall debt financing costs would likely be lower than that seen during recessions in the late 1980s and early 1990s. While annual public sector borrowing would also rise, it is likely to remain well within the bounds of recent historical precedent for recessions. By any sensible assessment, therefore, there is clearly enough scope to responsibly finance a green stimulus during recession through temporary public borrowing. If required, longer-term debt and borrowing could also be stabilised after 45 years, in part through progressive tax rises.

Finally, we discuss the institutional reforms that will be necessary to make effective fiscal and monetary coordination possible for the long term, and particularly to support long-term public and private green finance – whether in or out of a recession. We set out the shape of fundamental reforms to the UK’s macroeconomic policy frameworks, including a transformative new agenda for the UK’s fiscal rules, monetary policy, and macro-prudential policy – as well as the associated institutional assignments between the Treasury and the Bank of England. In doing so, we signpost the priorities for macroeconomic policy research concerned with supporting the path to a future sustainable economy.

Outside of a recession, our principal recommendation for government is to increase green investment, across both the public and private sector, as fast as is technologically possible. Second to this, we propose the government prioritises removing present day barriers to future expansions in green investment. A critical, intermediate objective in the next few years is to create as many ​‘shovel-ready’, green infrastructure projects as possible, since the number of fast-paced investment opportunities is a common limiting factor to effective infrastructure stimulus. These include intensifying the necessary research and development for future efficiencies and closing the UK’s low-carbon skills gap, for example by increasing the skills capacity to retrofit heat pumps across residential properties at scale.

The UK needs a Green New Deal that goes far beyond the country’s strategy to manage economic downturn. But the nature of our response to a recession could ultimately prove the difference between whether progress towards crucial climate targets is either derailed or realised. Recovery from a recession can no longer be thought about in terms of returning to a status quo. The policy response must be used to reprogram the nature, direction, and purpose of future supply and demand, as well as its level and growth rate. The responses to a recession need to become springboards to a different, sustainable economic future. 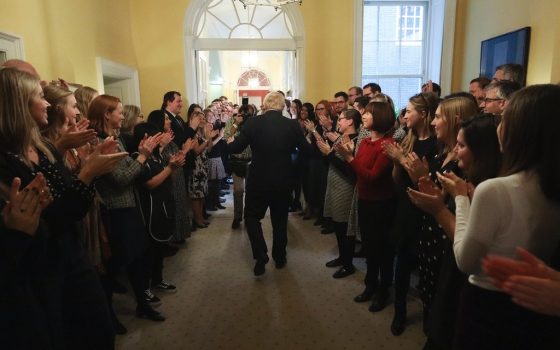 But richest 5% are better off by £3,300, suggesting Britain is being torn apart rather than levelled up