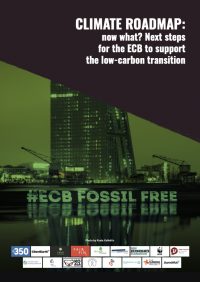 Produced by NEF and 16 partner organisations.

In July 2021, the European Central Bank (ECB) concluded its 18-month monetary policy strategy review, the first since 2003. Looking at its mandate as enshrined in the EU Treaties, responding to pressure from civil society and to mounting scientific evidence of the threat posed by climate breakdown, the ECB recognised that it must integrate climate considerations into its operations. The Bank outlined a detailed roadmap of its climate-related actions, signifying a major shift in its thinking. However, while welcome, the roadmap fails to deliver the ambition and urgency essential if the ECB is to fully integrate climate risks and impacts to its operations and support the low-carbon transition.

If anything, the current energy price crisis, which has lifted inflation to record high levels since the creation of the euro, has only reinforced the urgency for the ECB to act forcefully in support of the EU’s energy transition. Indeed, expanding the supply of domestic renewable energy would greatly reduce the EU’s exposure to volatile imported energy prices, such as gas and oil.

In this context, we argue for caution when it comes to the Bank’s potential response to a prolonged rise in energy prices, as alluded to by Isabel Schnabel in a recent speech.6 Before doing so, the ECB should carefully evaluate the impact of such a move on the cost of energy transition investments, which are more sensitive to capital cost than amortised fossil fuels assets.

In the face of the climate and energy crisis, it is time for the ECB to acknowledge the inadequacy of its current policy toolkit and explore ways to reconcile price stability and support for the low-carbon transition.

The Bank must recognise that voluntary, market-led approaches are not sufficient to redirect capital flows away from harmful investments that will eventually lead to an environmental, social, and economic catastrophe. It must use its powers to steer European finance towards mandatory alignment with international and European climate and environmental goals. Therefore, the Bank should be guided by a core set of principles to guide its policy decisions. We also put forward 5 sets of recommendations that the ECB can implement to align its policies to the transition pathway.