Free Riding on the Climate

The possibility of legal, economic, and trade restrictive measures to tackle inaction on global warming

The threat of global warming grows worse by the day. Hanging over the whole world is the unthinkable prospect of runaway climate change. All countries, rich and poor, will sooner or later be irreversibly damaged. After more than a decade, an effective international climate deal still seems a long way off.

The failure of conventional dialogue suggests that new strategies urgently need to be tried. This paper argues that economic and trade measures offer a new and entirely legitimate way to raise the costs of inaction to industrialised countries that are not supporting the Kyoto Protocol.

The failure to win comprehensive support for the Protocol among already developed countries is also distressing given the Protocol’s modest targets to reduce greenhouse gas emissions. Already, work has begun on what must follow Kyoto’s first implementation period, without one of the most important countries, the US, on board.

Both the UNFCCC and the Kyoto Protocol were negotiated in good faith. Based on existing rulings of the WTO, it would now be effective, appropriate and legitimate for countries, or groups of them, to use economic measures including trade measures, against other industrialised countries.

This would both level the playing field in terms of trade, for those countries that are bearing the costs of implementing their Kyoto targets and it would raise the costs of inaction for those who are not. There seem few other options left to the international community to progress a deal that is urgently needed to avoid disaster. 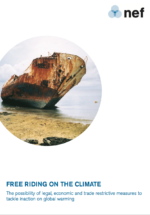