How Britain’s local economies are losing ground and fighting back

Profound changes are taking place in Britain’s economy. They are changes that undermine the fabric of communities and will derail government initiatives on tackling poverty.

In 2002, NEF revealed the phenomena of Ghost Town Britain. Under the pressure of wider economic forces, the closure of banks, pubs, corner shops, grocers and newsagents was creating deserts where communities no longer had easy access to local shops and services.

At the same time, an already unhealthy concentration of power in British retail was getting worse.

Now, 12 months on, even more life has been squeezed out of our genuinely local economies, and especially out of the once dynamic small and independent retail sectors. As this happens, the dynamic of the process seems to worsen. As ever fewer, larger players such as the big four supermarkets capture more of the market, their power means they are able to squeeze ever-better deals for themselves, at the cost of suppliers, farmers and smaller retailers. 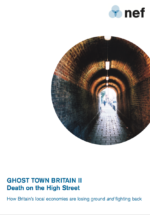