Spoiled Ballot launches a new Index of Democratic Power (IDP) based on analysis of British voters’ ability to influence the results of elections from 1954 to 2005.

The report reveals that the democratic power that we have in Britain is more unevenly distributed than income: the most powerful electors in Britain have 50 times more power in an election that the least powerful. By contrast, the richest 20 per cent of the UK population have 14 times more income than the poorest 20 per cent.

In addition, the IDP reveals the gross inefficiency of our electoral system. If each voter in a British election had their fare share of democratic power, they would have an IDP score of 100. However, the IDP reveals that: Only 2.6 per cent of UK voters have anything like their fair share of democratic power, with only 1.1 million voters of a voting population of forty-three million having an IDP of over 80. 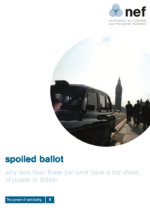