The rip-off of Iraq's oil wealth

Control of Iraq’s future oil wealth is being handed to multinational oil companies through long-term contracts that will cost Iraq hundreds of billions of dollars, according to this report from PLATFORM, published with nef and War on Want in the UK.

Crude Designs reveals that current Iraqi oil policy will allocate the development of at least 64% of Iraq’s reserves to foreign oil companies.

Iraq has the world’s third largest oil reserves. Figures published in the report for the first time show that the estimated cost to Iraq over the life of the new oil contracts is US $74 to US $194 billion, compared with leaving oil development in public hands.

These sums represent between two and seven times the current Iraqi state budget. The contracts would guarantee massive profits to foreign companies, with rates of return of 42 per cent to 162 per cent.

The kinds of contracts that will provide these returns are known as production sharing agreements (PSAs). PSAs have been heavily promoted by the US government and oil majors and have the backing of senior figures in the Iraqi Oil Ministry. Britain has also encouraged Iraq to open its oilfields to foreign investment.

However, PSAs last for 25 – 40 years, are usually secret and prevent governments from later altering the terms of the contract. 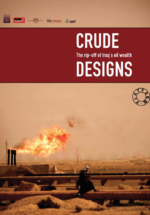