Community Development Finance Institutions (CDFIs) first came to prominence in the UK around ten years ago as means of providing loans to people and enterprises excluded from mainstream finance.

They were designed to create a positive cycle of investment, re-development and opportunity for some of the UK’s most disadvantaged communities by providing much-needed capital. NEF has conducted an in-depth survey to take stock, evaluate CDFIs achievements to date and inform the next stage of their development.

Reconsidering UK community development finance finds that the future of CDFIs is uncertain as Government and policy-makers have begun to question whether CDFIs have measured up to initial expectations. To answer this, the report provides the first comprehensive assessment of just how effectively enterprise-lending CDFIs address exclusion and disadvantage, and the policies and operating conditions that affect their ability to do this.

The report also looks at evidence from the US and Western Europe, where CDFIs are better supported by government. In their early years, CDFI’s in the US were largely funded by Government or foundations, which have continued to play a key role in supporting the ongoing development of the sector. The report finds that with the right support from government, regional authorities, funders and banks, CDFIs could play a major role in addressing access to finance in the UK. 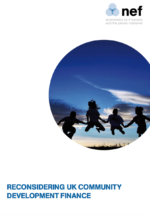