Towards an NHS response to global warming

Taking the temperature: towards an NHS response to global warming written by NEF for the NHS confederation says that the National Health Service faces a dual challenge.

As well as taking action to reduce its own carbon emissions, as the lead agency responsible for public health, it needs to invest in preventive healthcare to strengthen the resilience of the population, as well as in treatment for the victims of a warmer, more variable climate.

Taking the temperature shows that the NHS is a long way from reducing its energy consumption to meet the government’s target of reducing carbon dioxide (CO2) emissions to 20 per cent below 1990 levels by 2010 and 60 per cent by 2050.

As the report reveals, the sheer scale of the NHS, with 1 million patient contacts every 36 hours, means the organisation has a considerable carbon footprint, but also the potential to promote positive change. 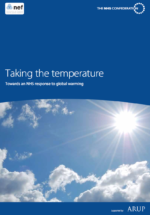