An index of carbon efficiency and wellbeing in the EU

In an age of climate change, when it is more important than ever that we use our resources efficiently, Europe as a whole is less carbon efficient at delivering human well-being in terms of relatively happy, long lives to its citizens than it was over 40 years ago.

On current performance, Europe is not remotely close to navigating an economic course set to reach its desired location on climate policy. It needs to achieve a carbon footprint small enough to help prevent the planet warming by more than 2 degrees above pre-industrial levels.

This requires cuts in emissions by industrialised nations of between 70 and 80 per cent by 2050 compared to 1990 levels according to Sir Nicholas Stern, author of the UK Treasury’s influential report on the economics of climate change. Worse still, Europe is heading in the wrong direction, its carbon footprint still growing, and its level of carbon efficiency in terms of fuelling happy, long lives — lower now than it was 40 years ago.

To reverse this trend, we need to look to the example of those European countries that are already the most efficient — some of the most socially progressive and technologically advanced nations anywhere in the world. Countries like Iceland, the highest scoring nation on the European Happy Planet Index clearly show that happiness doesn’t have to cost the earth.

Iceland’s combination of strong social policies and extensive use of renewable energy demonstrate that living within our environmental means doesn’t mean sacrificing human well-being — in fact, it could even make us happier. Countries that have most closely followed the Anglo-Saxon, strongly market-led economic model show up as the least efficient on the Index. 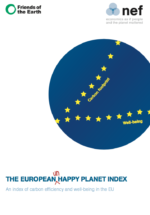