Hitting the target, missing the point

In the three decades since the Urban Regeneration Act, billions have been spent on low-income neighbourhoods, yet inequality continues to increase.

Now, new research from NEF using Social Return on Investment (SROI) principles, evaluating the impact of one of the government’s flagship programmes: the ​‘Local Enterprise Growth Initiative’ (LEGI) says that investment has not been targeted at the places where it would have the most impact because it has not been supported by robust measurement.

NEF’s report, Hitting the target, missing the point: How Government Regeneration Targets fail deprived areas, is the first of two nef reports on inequality and local economic development, and shows that a new, more sophisticated approach to measuring change is needed so that a clearer understanding of the impact of regeneration programmes such as the LEGIs can be used to inform the development of future policy. Evaluation of the impact of regeneration programmes tends to focus on easy to measure economic outputs — such as the number of jobs and enterprises created and people trained. However, ​‘outputs’ like these do not provide a true, or sufficient measurement of the change to people’s lives. nef research shows, for example, that an increase in the quantity of jobs in an area does not necessarily change underlying inequalities. nef analysed the effects of the first year of a LEGI programme in the St Helens metropolitan borough of Merseyside.

As well as the headline outcomes of increasing local enterprise, employment and self-employment, nef’s research modelled a range of other benefits that local people believed would flow from the programme – the changes that they believe really matter — such as improvements in health, crime and quality of life. 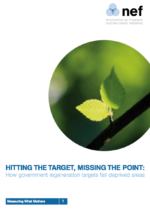