At a time of rising unemployment and economic insecurity, some people argue that we cannot afford the ​‘luxury’ of protecting the environment.

But this report from a new coalition of the UK’s leading environmental and social justice groups argues that tackling climate change actually offers a huge opportunity for boosting the economy and reducing poverty in the UK.

One in five people in the UK still live in poverty, often without enough money to heat their homes or to eat healthily. Tackling Climate Change, Reducing Poverty shows that the poorest people in the UK will be worst affected by the effects of climate change. And unless measures to combat climate change are carefully tailored, they will hit the poorest hardest: taxing fossil fuels to reduce emissions would make it harder for people on low incomes to buy food and use transport.

But the report also shows how the need to combat climate change could present a huge opportunity to tackle poverty too. There are a host of climate mitigation measures which could help to lift people out of poverty: home insulation cuts fuel bills, keeps homes warm and reduces CO2 emissions. Investment in public transport provides affordable travel for all and cuts air pollution.

All these measures could be part of an equitable transition to a low-carbon economy which creates new skilled ​‘green collar jobs’ in home insulation, energy efficiency and public transport which help us battle the recession. Training should be made available to help people access these new job sectors. The report also recommends promoting sustainable public service provision, including low-carbon food procurement for hospitals and schools, and ensuring that housing and urban development works from low carbon design principles.

Tackling Climate Change, Reducing Poverty features several case studies of projects that have simultaneously cut emissions and helped people on low incomes. For example, in a deprived community in Braunstone, Leicester, an alliance of local groups helped raise funds for photovoltaic solar energy systems to be placed on the roofs of 50 south-facing houses. Local small firms were given training to install the solar panels, which have now cut carbon emissions on the estate and lifted residents out of fuel poverty. Projects such as these, the coalition believes, must now be rolled out nationwide.

The message from the coalition is clear: now, more than ever, government can — and must — tackle poverty and climate change. If not, the poorest people, both in the UK and around the world, will pay the price.

The Roundtable on Climate Change and Poverty in the UK are:

With contributions from Sustrans, TUC, UNISON, Help the Aged, Every Action Counts and the NHS Confederation. 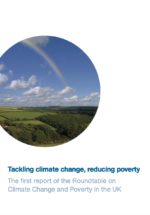