What is the government doing that is new and additional to stimulate the economy by spending on the environment?

Gordon Brown has claimed that around 10 per cent of the UK package to stimulate the economy was directed towards ​“environmentally important technologies”.

But as this NEF report commissioned by Greenpeace shows, new funding for greening the economy amounts to just 0.6 per cent of the UK’s total stimulus package.

The government could be missing a huge opportunity – the chance to boost the economy,
ensure energy security and act on climate change, by directing new and additional resources
into the environmental transformation of the economy.

In the context of the economic recession, the increasingly urgent challenge of climate change,
and calls for a Green New Deal, this report asks: what is the government doing that is new and
additional to stimulate the economy by spending on the environment?

The report reveals that: 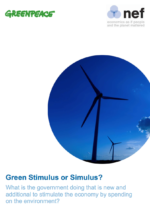