Why good lives don’t have to cost the Earth

The Happy Planet Index provides a new compass to set society on the path to real progress by measuring what truly matters to us — living a long and happy life — and what matters to the planet — our rate of resource consumption.

In an age of uncertainty, society globally needs a new compass to set it on a path of real progress. The Happy Planet Index (HPI) provides that compass by measuring what truly matters to us – our well-being in terms of long, happy and meaningful lives – and what matters to the planet – our rate of resource consumption.

The HPI brings them together in a unique form which captures the ecological efficiency with which we are achieving good lives. This report presents results from the second global HPI. It shows that we are still far from achieving sustainable well-being, and puts forward a vision of what we need to do to get there.

Not since World War II has society globally been faced with so many threats. In the last few years we have driven straight into the wall of the biggest global economic downturn since the Great Depression of 1929, whilst mainstream culture has, at last, been rudely awoken to the ever-growing threats of climate change and the exhaustion of our natural resources. People fear for the future. Meanwhile, the problems that plagued us before, risk becoming even more acute: more than half the world’s population lives on less than $2.50 a day; inequality continues to rise even in richer countries.

And yet, with crisis comes opportunity. The dogmas of the last 30 years have been discredited. The unwavering pursuit of economic growth – embodied in the overwhelming focus on Gross Domestic Product (GDP) – has left over a billion people in dire poverty, and has not notably improved the well-being of those who were already rich, nor even provided us with economic stability.

Instead it has brought us straight to the cliff edge of rapidly diminishing natural resources and unpredictable climate change. No wonder that people are desperately seeking an alternative vision to guide our societies. In 2008, Americans voted for ​‘change’ and ​‘hope’ above else.

The HPI was launched in July 2006 as a radical departure from our current obsession with GDP. Working from first principles, the report identified health and a positive experience of life as universal human goals, and the natural resources that our human systems depend upon as fundamental inputs. A successful society is one that can support good lives that don’t cost the Earth. The HPI measures progress towards this target – the ecological efficiency with which happy and healthy lives are supported.

Its message resonated with hundreds of thousands of people around the world – within two days of its launch, the report was downloaded and read in 185 countries worldwide. Three years on, it is time to turn interest into action.

HPI 2.0 has been calculated with new improved data sets for 143 countries, covering 99 per cent of the world’s population. Scores range from 0 to 100 – with high scores only achievable by meeting all three targets embodied in the index – high life expectancy, high life satisfaction, and a low ecological footprint.

The results turn our idea of progress on its head. Whilst the HPI confirms that the countries where people enjoy the happiest and healthiest lives are mostly richer developed countries, it shows the unsustainable ecological price we pay. It also reveals some notable exceptions – less wealthy countries, with significantly smaller ecological footprints per head, having high levels of life expectancy and life satisfaction. In other words, it shows that a good life is possible without costing the Earth.

The highest HPI score is that of Costa Rica (76.1 out of 100). As well as reporting the highest life satisfaction in the world, Costa Ricans also have the second-highest average life expectancy of the New World (second only to Canada). All this with a footprint of 2.3 global hectares. Whilst this success is indeed impressive, Costa Rica narrowly fails to achieve the goal of ​‘one-planet living’: consuming its fair share of natural resources (indicated by a footprint of 2.1 global hectares or less).

In summary, the countries that are meant to represent successful development are some of the worst-performing in terms of sustainable well-being. But perhaps, even if we are not there now, might we be moving in the right direction? HPI 2.0 tests this by looking at changes in HPI over time for countries where more data is available. The results are not promising:

Clearly, business as usual will not help us achieve good lives that do not cost the Earth. However, looking at the components of the HPI provides some clues:

Steps towards a happier planet can be found in many places. We focus on a few examples, several inspired by the first HPI report. One particularly promising model, is the Living better, using less strategy emerging in Caerphilly, a local authority in South Wales. The strategy focuses on the three components of the HPI – health, a positive experience of life, and ecological footprint – and sets out some interventions aimed to improve performance on all three.

Of course, each thread of work towards a happier planet needs to be woven together to create a full tapestry. The economy, communities, lifestyles and aspirations of a happy planet will be very different to those that lock us into our current ecological inefficiency. The analyses in this report suggest that the current dominant economic framework is, without exception, unable to simultaneously achieve the three goals of high life satisfaction, high life expectancy and one-planet living. This applies across the development spectrum as traditionally viewed, although it appears that middle-income countries, such as those of Latin America and South East Asia tend to be the closest to achieving sustainable well-being. In other words, our current framework achieves its optimum at middle-income levels, but even that optimum does not represent good lives that do not cost the Earth.

We do not, in this report, claim to provide answers to all the questions of what a happy planet would look like. However, at the end of the report, we make some suggestions of the strategies required to achieve sustainable well-being. The solutions suggested all constitute win-win strategies – increased well-being and reduced ecological footprint. In this way, the HPI presents a positive image of futures which countries will actively choose to create for themselves, rather than a necessary burden that must be sustained and endured.

At www​.hap​py​plan​etindex​.org, we launch a new Charter for a Happy Planet. Those who sign it believe that:

Times of crisis are times of opportunity. Now is the time for societies around the world to speak out for a happier planet, to identify a new vision of progress, and to demand new tools to help us work towards it. The HPI is one of these tools, but we also hope that it will inspire people to act. 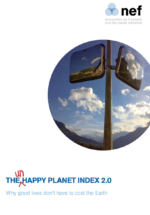