Overconsumption, not overpopulation, is the real threat to the environment. Even the recession has had little impact on our burgeoning ecological debt.

The Consumption Explosion: the third UK Interdependence Report argues that a recently revived focus on global population as an environmental issue is a critical distraction from tackling overconsumption in wealthy countries. It makes the case by looking at the dynamics of population growth and current patterns of human migration. It contends that the only effective and socially acceptable path to influence population dynamics is through eradicating poverty and reducing inequality, and that, given environmental realities, this is hard-wired to ending rich-world overconsumption.

For example, one person in the United States will, by 4am in the morning of 2 January, already have been responsible for the equivalent in climate change causing carbon emissions that a Tanzanian would take a whole year to generate. A UK citizen would reach the same point by 7pm on 4 January.

With the world as a whole going ever earlier into ecological debt, the report looks at the scale of UK and other wealthy nation’s consumption, and the impact this has on setting economic role models for the rest of the world. The Consumption Explosion says that the most pressing need is to take a radically different view on the nature and quality of ​‘rich-world’ consumption, in almost every area of life. Average levels of consumption, per person, in poorer countries have changed little over many decades. In rich countries, however, we are each consuming vastly more, yet with little or nothing to show for it in terms of greater life satisfaction.

The report describes the vicious circle created by the current economic system. We are faced on one hand by overconsumption, climate change and resource scarcity, and on the other by destabilising inequalities between and within countries which in turn put pressure on population growth in some of the poorest nations and increases the risk of economic, political or environmental human displacement.

Key findings in The Consumption Explosion include that:

In spite of one of the biggest global recessions for a century – the trend towards ever greater overconsumption has been hardly altered. After more than two decades of going ever earlier into ecological debt – consuming resources and producing more waste than ecosystems can provide for and absorb – in 2009 there is a delay, in effect, of just 24 hours before the world as a whole goes into ecological debt. In 1995 it was 25 November. At the turn of the millennium, world ecological debt day advanced to 1 November. It was 6 October in 2007 and, a year later lurched forward by almost two weeks to 23 September in 2008. This year, World Ecological Debt Day falls on 25 September but, allowing for a leap year, it means that the impact of a massive world-wide recession has slowed its arrival by just a single day, leaving the overall trend deeply negative and humanity still environmentally over-extending itself to a dangerous degree.

But doom-mongering about population is misleading

Approximately 50 years ago, the average woman had between 5 and 6 children; now she has 2.6 – closing fast on the level of 2.1 at which populations stabilise. Go below this rate, and over time levels begin to declne. This, too, is in the absence of tough government birth-control policies. Thirty years since China implemented its one-child family policy, research presented here warns of the potential unintended consequences of coercive population control, especially in contrast to simply following good, gender-aware development and poverty reduction. Redistribution of wealth is also seen to be central to a ​‘demographic transition’ that can defuse any population explosion.

The current economic system, which both creates and depends on unsustainable consumption, has greatly increased income and asset inequality within and between nations. It has also degraded the environment, resulting in climate change, and failed substantially to reduce global poverty. High birth rates are a function of poverty, and are directly correlated to a number of factors: lack of basic education (particularly for girls); lack of access to reproductive health services; high infant/​child mortality rates; and dependence on adult children for income (not least as migrants). Thus overconsumption drives both population growth and movement of people within and across borders. If the latter is to be reduced, the consumption patterns of rich countries must first be cut back to sustainable levels.

Migration is typically good for the UK…

Historically, immigration to the UK has risen as its domestic birth rate has fallen. In line with this pattern, the present decline in the UK fertility rate would normally increase the immigration flows into the country. Should anything block this flow, either because of lack of economic opportunity, perceived xenophobia, or prohibitive regulation, the UK may lose, both socially and economically.

In spite of an increasingly harsh political climate facing migrants to the UK, inward migration is typically positive. The tax paid by migrant workers outweighs their cost to the community in social benefits, but these data have not been widely publicised, and good recommendations for easing particular ​‘sectional problems’ have been largely ignored. For example, the UK Government has flatly refused to contemplate ​‘regularising’ undocumented migrants already resident and working in the country, and this is despite the fact that doing so could bring a £3‑billion benefit the to the economy, according to a study by the London School of Economics.

…But can be bad for the sending country

Many vital UK public services like health and education could not function without the arrival of skilled professionals from overseas. For example, the shortage of nurses in the UK, plus active international recruitment has been an important pull factor for nurses from developing nations. In the last five years alone, the UK has imported 160 trained nurses from Malawi, 227 from Botswana, 435 from Zambia and 9,322 from the Philippines. South Africa, Ghana, Kenya, Lesotho, Sierra Leone and Zimbabwe also send nurses who have been trained at Africa’s public expense to work in the NHS. Since 1997, almost 80,000 international nurses have registered in the UK, making up approximately 45 per cent of new registrants However, the latest Government figures on work permits and first permissions fell dramatically between 22,477 in 2005 to 7,500 in 2007 – a decrease of two-thirds. The fall is partly due to a fall in demand due to an increase in availability of qualified healthcare professionals in the UK resident labour market, as well as changes to immigration rules in 2006.

Some of the more bizarre ways in which the economy fails to respect, or even recognise environmental parameters, have not changed since the earlier UK Interdependence Reports. All around us still, are ships, lorries and planes passing in the night, wastefully carrying often identical goods from city to city across the globe and back again to meet ​‘consumer demand’.

These are just some of the most recent examples involving the UK. For example, we export 4,400 tonnes of ice cream to Italy, only to re-import 4,200 tonnes. We import 22,000 tonnes of potatoes from Egypt whilst exporting 27,000 tonnes back again. Then there are the 5,000 tonnes of toilet paper heading from the UK to Germany, with over 4,000 tonnes returning, and 10 tonnes of ​‘gums and jelly’ sweets going back and forth to Thailand. At the last count, 117 tonnes of ​‘sweet biscuits, waffles and wafers, gingerbread and the like’ (to use the category used by trade statisticians), came into the UK, rumbling passed 106 tonnes headed in the opposite direction.

Our energy dependence is rising

At a time of increasing global energy insecurity, the UK’s dependence on energy imports has been steadily rising since about 1999. In 2004, we were no longer able to meet all our energy needs from domestic resources, and our ability to fuel ourselves has weakened since. In the four years between 2004 and 2008, the energy dependence factor – a ratio that reveals how much we depend on imported energy – increased 5‑fold, rising 30 per cent between 2007 and 2008 alone.Symbolic failures to develop renewable energy alternatives, such as the close of the Vestas wind turbine factory on the Isle of Wight, suggest that the UK is far short of being prepared for the great energy transition in the face of climate change and as the oil age fades away. To reverse the trend, all the following could help: an obligation on suppliers to reduce demand, coupled with higher mandatory efficiency standards; the widespread uptake of renewables; and a shift to more decentralised energy generation.

The UK’s food self-sufficiency appears to be below what it was 40 years ago. Yet, climate change, new human dietary patterns that put more pressure on land and energy, energy prices and shortages, and competition globally between land for food and land for biofuels, have all increased awareness of the vulnerability of the international food chain on which we depend. In response, many wealthy countries are relying ever more on some of the poorest to guarantee supplies. Since 2006, large-scale transnational land acquisitions and leases have targeted up to 20 million hectares of farmland in developing countries, according to the United Nations Special Rapporteur on the Right to Food, an area equivalent to all the farmland in France. The UK is also Europe’s second-largest importer of global fish stocks at a time when scientists warn of their imminent collapse due to over-fishing. 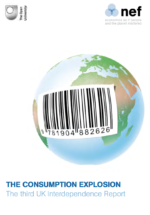