Why the UK needs a fair lending law

The very poorest people in the UK are paying thousands of pounds to legal loans sharks who charge them over the odds for sommething that most of us can easily access at the bank: credit.

The UK has a major debt problem – one unnoticed by mainstream media and society. It affects the very poorest in our society. At least three million UK households pay hundreds of thousands of pounds to legal loan sharks who charge them over the odds for something that most of us can easily access from banks: credit.

Because income and benefits levels in the UK are too low to allow people to save, make ends meet, cope with an unforeseen emergency, or just afford rising living costs, people at the bottom of the income ladder are driven to use high cost credit.

Nine million people in the UK don’t have access to credit from banks, so have no choice but to use rip-off lenders: The cost of a loan of £100 with a company such as Provident Financial can be £49.50 – nearly 50 per cent of the amount borrowed, or an APR of 545.2 per cent. A loan from a payday lender costs even more; to borrow £100, lenders charge £25 for one month – an annual percentage rate of nearly 1300 per cent. These lenders charge whatever they want – the sky is the limit.

The Office of Fair Trading estimates that high cost lending in the UK is worth £35bn a year. A huge amount squeezed from the budgets of the poorest in society. Unlike many European countries, the UK guarantees its citizens no legal access to affordable credit, or caps the cost of it; lenders can refuse to lend to anyone for any reason, and they can charge any price – be it 500 per cent or 5000 per cent. In other words, there is no fair lending ethos in this country.

Legislation that would stop these practices has been rejected by Government based on flawed evidence.

The Government argues that poor people in Germany and France – where the price of credit is capped – are worse off than poor people in the UK. But the ​‘evidence’ for this claim is flawed and ignores the following key facts:

We call for an independent and wide-ranging review of the UK consumer credit market. We recommend to Government the following:

The introduction of a community reinvestment act that promotes transparency in the financial system, that applies to all lenders. Banks that do not invest sufficiently in local communities should be forced to sponsor a local affordable lender. High-cost lenders (e.g., doorstep lenders) should be compelled to alert people to alternative, cheaper lenders operating in their area and co-operate with them.

The introduction of a cap on the total cost of credit. The exact level needs to be investigated as there is a need to establish the real risk of default and the cap to be set accordingly. In addition, there needs to be a discussion of where the cut-off point should be: if people have more than a 50 per cent risk of defaulting on their loans, is it wise for them to take out loans in the first place?

Abolishment of credit dependency. Independent research should establish the shortfalls in income and boost levels where necessary to maintain an accepted standard of living. Also, it should seek to promote savings programmes and support credit unions and CDFIs across the country to help them break the market dominance of payday and doorstep lenders. 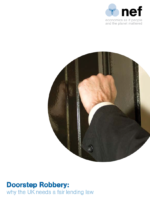