The stock market has risen by 50 per cent. House prices are up. City bonuses are back. With the prospect of growth in the economy for the first time in 18 months, there is a palpable sense of relief that the world can return to business as usual. The new mood of optimism is both misguided and premature. Central bankers and finance ministers have spent trillions of pounds, dollars, euro, yen and renminbis keeping the global economy alive, but the underlying problems – an unbalanced global economy and inadequately controlled financial markets – remain untackled.

There are three reasons for concern. The first is that the recovery will stall once the artificial stimulus from low interest rates, quantitative easing and record levels of borrowing is withdrawn. A glance at the history books shows that Roosevelt wrongly believed in 1936 that the US economy was strong enough to withstand cuts in public spending, and plunged America back into recession in 1937 as a consequence.

The second problem is that the first glimmers of recovery lead to a sharp increase in commodity prices – especially oil and industrial metals – and these in turn sow the seeds of the next downturn. Oil prices have doubled since the start of 2009 amid growing evidence that supplies of crude cannot keep up with demand. In the first Green New Deal report, we warned that the financial collapse was part of a triple crisis that had to be addressed.1 Peak oil and climate change were the other two legs of the stool; neither has been addressed.

Finally, there is the danger of complacency. The notion that the most acute financial crisis since the Great Depression is now a thing of the past sounds unerringly like the politicians who, in August 1914, promised that the Great War would be all over by Christmas. Instead, it was the start of a 30-year crisis that embraced two world wars, an economic slump unrivalled since the dawn of the industrial age, and the rise of brutal totalitarian governments.

Just as in 1914, the global balance of power is changing, with China threatening America’s hegemony in the way that America and Germany rivalled Britain a century ago. Just as in 1914, an established economic order has been uprooted. Then it was the Gold Standard, free trade and unrestricted capital flows. Today it is the dollar, free trade and unrestricted capital flows.

Add in the new ingredients – the battle for control over resources and global warming – and everything is in place for a prolonged period of upheaval. There will be periods, similar to that in the middle to late 1920s, when the global economy goes through a benign patch, but the respite will be brief. Even feeble economies show occasional signs of health if they are provided with enough support. But make no mistake: what we have now is a zombie economy that inhabits a netherworld between life and death.

Yet the past also provides potential ways out. The so called ​‘golden age’ of 1945 to the late 1970s showed that damaged economies could be rebuilt if policies were enacted with the clear end goal in sight i.e., ensuring that the financial sector was regulated to finance the rebuilding of the economy, improving social conditions and the maintenance of full employment. The Green New Deal programme is an updated version of this, tackling as it does the triple crunch of the economic crisis, climate change and the need for decarbonised energy security.

This means that cutting spending now will make the recession worse by increasing unemployment, reducing the tax received, and limiting government funding available to kick-start a Green New Deal while there is still time. In fact, as we set out in this report, now is the time for spending, not cutting.

As unemployment rose in the 1980’s the Thatcher government was able to offset cuts in public expenditure with rising revenues from North Sea Oil and Gas.(see Appendix 3) Now the opposite is true. As North Sea oil and gas supplies decline, present and future governments will experience declining revenues. That is why it is critically important that we manage the downturn now to prepare for the future.

This report proposes that the government extends quantitative easing by £50 billion in the short term to finance expenditure under the Green New Deal. In this way, quantitative easing could be used to increase long-term, sustainable economic activity and with it a huge growth in jobs.

To illustrate the potential, new calculations produced for this report reveal that:

Once spending on the green economy of the future has breathed life back into the deflated economy, the Green New Deal will require a whole new savings and investment infrastructure to meet the long-term investment needed to underpin the Green New Deal and to meet the needs of a new generation of investors who are fed up with all that has gone before. We have also suggested a range of new measures to help public borrowing and encourage public investment by individuals, local authorities and companies in greening and reviving the economy. The foundations for these must be laid now. These include:

Despite the appearance of calm, the need for the implementation of the proposals set out in the Green New Deal reports is greater than ever.

When we launched the first report, new analysis suggested that from the end of July 2008 there were only 100 months, or less, to stabilise concentrations of greenhouse gases in the atmosphere before we hit a potential point of no return. The climate clock is still ticking and nothing like the scale of reform needed to rapidly re-engineer the economy has been implemented, anywhere.

The Green New Deal outlined in this report is not a return to business as usual. Far from it. It is an interlinked package that recognises the need for targeted public spending in a downturn. Not to further fuel an economy hard-wired into ever increasing use of fossil fuels, but to reinvigorate the productive economy and lay the foundations of the low-carbon infrastructure of the future. 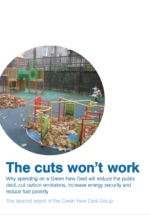