Why we need a new economic direction

Four years on from NEF’s Growth isn’t Working, this new report goes one step further and tests that thesis in detail in the context of climate change and energy.

As economist Herman Daly once commented, he would accept the possibility of infinite growth in the economy on the day that one of his economist colleagues could demonstrate that Earth itself could grow at a commensurate rate.

Whether or not the stumbling international negotiations on climate change improve, our findings make clear that much more will be needed than simply more ambitious reductions in greenhouse gas emissions. This report concludes that a new macro economic model is needed, one that allows the human population as a whole to thrive without having to relying on ultimately impossible, endless increases in consumption. 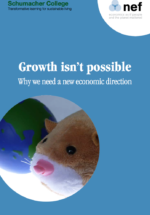