Reflecting on NEF’s decade of experience in democracy and participation, this pamphlet argues that tackling the biggest issues, from climate change to social inequality, needs to start with small conversations between friends and neighbours.

By linking these small groups together we can sow the seeds for new social movements.

On 21 April 2010, seven members of Age Concern met in the echoey hall of a community centre in Ilford to talk about who they trust with their most sensitive personal information. Armed with the key facts, they discussed what their health records meant to them, how they should be safeguarded and who should have access. After 90 minutes they were better informed, more opinionated and more engaged. When it came to their health they left more ready to be active citizens. As participation goes it was nice, although hardly earth-shattering.

That spring and summer, though, a lot of other people were having the same conversation. Students in lecture theatres, families in living rooms, patients in doctors’ surgeries. In total 1,500 people used the same information to draw their own conclusions at more than 100 events across England. Another 1,500 learned more about the issues at stalls in libraries and museums, while 3,000 young people talked about the same issues in school science lessons. And more people used materials specially designed to help people with learning difficulties to get involved.

All told, more than 6,000 people talked about the topic of health and patient records that spring and summer. Those conversations were linked through a project called Who Sees What, an attempt to stimulate hundreds of conversations and link them together to create a rich picture of public views, with the potential to inform and shape public policy.

The UK faces an interlinked set of economic, environmental and political challenges that have led nef to call for a ​‘great transition’ – a fundamental shift to a more sustainable, socially just way of living. But transition cannot be achieved from the top down. It will require central and local government, businesses, communities and individuals to develop their own understandings of sustainability and social justice and to debate and negotiate with each other about the way forward.

At the moment, however, there is no easy way to get this kind of debate to happen. Our social fabric is fragmented, and opportunities for debate are few and far between. There is little space for groups to deliberate about complex, pressing issues and even less space for them to share their views with each other. The internet is at best a partial solution: there is no substitute for face to face discussion.

Processes such as Who Sees What offer a clue as to how problems like this can be overcome. We call this kind of approach ​‘connected conversations’. Unlike many forms of public engagement, connected conversations are not about settling issues or reaching consensus. They simply let citizens engage in public discussion with friends, family or colleagues in their existing networks and then link these discussions together. Rather than seeking to generate a collective decision, they reflect that tackling the biggest issues means making many small decisions and then finding the links between them. They are, in effect, talking shops – and we are proud to describe them as such.

Many of the biggest issues are ​‘wicked problems’: thorny topics that bring about disagreement about the very nature of the problem and repeatedly defy solution. Policy interventions in wicked problems often bring about unintended consequences. For example, efforts to reduce the harm caused by illicit drugs by restricting their supply have led to drugs that are available being adulterated with more harmful chemicals, leading to greater health risks to users.3 Such problems cannot be fully solved but they can be managed. Successful management involves drawing on the information, insight, ideas and energy of as many of us as possible.

The connected conversation approach has evolved over more than a decade of work at nef, primarily in the field of science communication. Through projects such as Democs, Open Up and Science on the Street we have explored how and where deliberation can take place and what can link it together. We are grateful for the support of the Wellcome Trust, which has consistently been willing to support innovative and untested work in this area.

Our understanding of the connected conversations approach owes a debt to other work, including Involve’s recent work on distributed dialogue. Such publications have identified the need for distributed engagement approaches. This paper is our own contribution to the growing body of literature in this area, drawing on our experience to suggest a practical model for societal debate. It sets out what we mean by connected conversations, and explores the role they can play in addressing some of the major challenges we will face over the next decade.

Our paper is divided into four chapters, each covering one of the four features that define the connected conversations model. These chapters are entitled ​‘Openness’, ​‘Deliberation’, ​‘Information’ and ​‘Connections’.

‘Deliberation’ and ​‘Information’ describe the way in which individual conversations take place, and explore the specific challenges encountered when running events at arm’s length. ​‘Openness’ and ​‘Connections’ describe the structures that link the conversations together.

Connected conversations that embody these four features can help mobilise individuals, civil society groups and government to solve the challenges of the twenty-first century and to ensure that they are not only taking action, but doing so together. 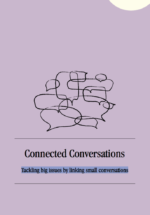