How to save the public finances and keep the economy afloat

As the public are told by all the main political parties that large spending cuts are inevitable, the Green New Deal Group show that real alternatives exist.

This briefing reveals, for the first time, that the public deficit could, in fact, be substantially offset by a range of progressive measures on tax.

In the short term, government spending is needed to keep people in work as the only guaranteed way to reduce a deficit in a time of unemployment. When the immediate crisis has passed and the government needs to balance its books again, there are two options: to cut government spending or to raise revenue. As the Green New Deal Group’s briefing, The Great Tax Parachute: How to save the public finances and give the economy a soft landing shows, the first of these, does not need to be an option.

Taken together, the Green New Deal Group estimate that more than £100 billion a year is lost at present because of abuse of loopholes in the tax system, tax bills remaining unpaid and from illegal non-payment of tax. Action on these issues is needed now. 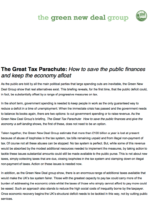