A new approach to evaluating Runway 3

A comprehensive reassessment of the business case for the expansion of Heathrow Airport. Using Social Return on Investment principles and updated data, this report finds that a third runway would leave society £5 billion worse off.

“This new report establishes robust, well-rounded evidence for what many in business and civil society have suspected all along – that the case for a third runway at Heathrow is at best incomplete and at worst completely flawed. By taking an approach based on Social Return on Investment analysis, NEF has produced a more rounded and realistic analysis of the costs and benefits of Runway 3.”
- from the foreword by Ian Cheshire, Group CEO of Kingfisher plc

The New Economics Foundation (NEF) has conducted a detailed, independent re-evaluation of the case for a third runway at Heathrow airport. Our study finds that the costs of the Runway 3 proposal outweigh the benefits by at least £5 billion. In light of our analysis and in view of the formidable targets for reducing greenhouse gas emissions our conclusion is that expanding Heathrow cannot be justified.

The official sanction for Runway 3 came after six years of consultation, debate and controversy. The 2003 Air Transport White Paper asserted that there was a powerful economic imperative for an additional runway, with only the provisos that conditions relating to air quality, noise and improving surface access should be met. Analysis by the Department of Transport (DfT) in 2009 (Adding Capacity at Heathrow Airport: Impact Assessment) found a net benefit to society from Runway 3 of £5.5 billion.

In contrast with the optimistic outlook put forward by the DfT, our analysis has arrived at a net cost to society from the new runway of between £5 billion in our central case and £7.5 billion in a worst case scenario based on sensitivity tests using alternative carbon prices and higher community costs.

We have calculated the net cost using two approaches. First, we have rerun the DfT’s model using new assumptions about economic growth, exchange rates, carbon prices and other factors. The model generates estimates of the economic benefits and carbon costs from the new runway as well as the infrastructure costs.

Second, informed by stakeholder engagement we have recalculated the costs to the local community of living with a new runway. The DfT’s model does not take full account of the substantial and highly material community impacts. Based on stakeholders’ insights and experience, our report looked again at the potential costs of additional noise and poorer air quality, and for the first time estimated costs for surface congestion and community blight – factors that were not quantified by the DfT. This compares with the DfT’s estimate of local impacts (additional noise disturbance and air pollution) of just £0.4 billion.

Social Return on Investment (SROI) brings a fresh perspective to the debate on Runway 3. SROI differs from existing methods of appraisal in three ways. First, it is informed by the views of stakeholders who play a central role in determining the outcomes and values. Second, it starts from the principle that we should value the things that matter, rather than just those things that are easy to monetise. Finally, it measures explicitly across a ​‘triple bottom line’ of social, environmental and economic returns. SROI is concerned with the net value of Runway 3 when social, environmental and economic factors are examined together.

Much effort has been made by those in favour of airport expansion to ​‘prove’ an incontrovertible economic case for it. But the economic benefits are often difficult to pin down. Not only is there lack of an agreed metric for accurately measuring the economic benefits but there are several unresolved and contested issues.

The proponents of a Runway 3 also face a formidable environmental hurdle because of the climate change impacts of air travel. Aviation policy clashes with objectives for sustainable development and policy to tackle climate change. The UK has a commitment in law to an ambitious target for reducing greenhouse gas (GHG) emissions by 80 per cent below 1990 levels by 2050, and also to an aviation specific target that requires the industry to emit no more CO2 in 2050 than it did in 2005. This means that an impartial analysis invites caution in response to any proposals to expand the infrastructure and capacity of an industry that has particularly intense impacts on climate change.

Despite industry claims, there are no technological magic bullets on the horizon that will dramatically cut aircraft emissions. The Committee on Climate Change, set up under the auspices of the Climate Change Act of 2008, is clear that meeting the aviation target will require demand management measures. They demonstrate that advances in technology and emissions trading alone will not be enough.

Even if the industry achieves the target for emissions in 2050, by then it will account for at least a quarter of the UK’s entire emissions budget. To allow the aviation industry to maintain its level of emissions means that all other uses of fossil fuels – for heating, road transport and food production for example – will have to be reduced much more dramatically. This will be not only very challenging in practical terms, but also problematic for society from an equality perspective. In effect, it would mean shifting the burden of emissions reduction from the rich to the poor, as it is predominantly the rich that fly.

In summary, our findings suggest that building a Runway 3 would destroy rather than create value, demolishing any case for Heathrow expansion. With such high social and environmental costs associated with it, the burden of proof should lie squarely with proponents to demonstrate that Runway 3 is in the public interest. But this report is about more than the Runway 3, or indeed aviation. Historically governments have often overplayed the economic arguments in favour of big infrastructure developments such as airport and road expansion. Many countries are strewn with ​‘white elephants’ — costly development schemes of highly questionable value that began life with the force of apparently robust economic argument behind them.

In the context of binding emissions reduction targets, we can no longer afford to be cavalier about these decisions. Locking the UK into a high carbon infrastructure now may mean that we pay the price for generations to come. Research by nef has shown that from August 2008 we may have just 100 months to stabilise concentrations of GHG in the atmosphere. Even before Runway 3 is built, the UK will need to be well on its way to decarbonising its economy. This means capital investment should be directed to projects that put the UK onto a low carbon trajectory rather than taking us in the opposite direction. It is imperative that we allocate our carbon budget in the most efficient and equitable way, and that we direct this most scarce resource towards those things that will create the most social value. This must surely be the test for any proposed infrastructure project in the future. 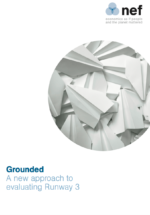