Why enterprise-based regeneration is not working

As the public sector is cut back and jobs are lost where will the newly unemployed go? The Coalition Government hopes that the private sector will emerge to absorb both these newly unemployed as well as the existing 5 million claiming benefits.

But how likely is this, especially in the most deprived areas? This report explores if new enterprise really can fill the employment void.

The lynchpin of government efforts to offset public spending cuts and grow the economy is to encourage private sector growth. Low-performing regions (those outside London, the South East and East of England) in particular have been targeted with an employers’ National Insurance contributions (NICs) waiver designed to encourage new enterprise and increase jobs.

The evidence in this report, however, suggests that this measure will barely begin to tackle the ​‘jobs gap’ – that is, the difference between the size of the working age population and the number of employment positions – which was already over five million in England in 2008, before the recession had made its full mark and before public sector spending cuts.

The NICs waiver comes on top of initiatives operating in deprived areas across England trying to tackle low enterprise and employment levels. While deprived neighbourhoods contain less than a fifth of the population they have almost a quarter of those claiming benefits. In the past ten years these areas in particular have been propped up by a growing public sector and through regeneration spending. In this new era of public sector spending cuts, it follows that these areas will be hardest hit. This will undoubtedly result in a widening of spatial inequalities at a time when the government claims that it wishes to ​‘rebalance’ the economy away from London and the South East to other regions.

The big task for enterprise initiatives operating in deprived areas is thus threefold:

To assess whether new enterprise will be able to fulfil this task, this report analyses trends in enterprise dynamics in England between 2002 and 2009. It finds that:

In conclusion, the combination of the shift in business dynamics towards smaller units and high enterprise churn has contributed to the share of enterprise declining in the most deprived areas. In this context, the NICs waiver is unlikely to be sufficient to overturn the trend. This is not to say that enterprise initiatives should be abandoned. The analysis of LEGI areas shows that targeted intervention can work. But it is also essential to tackle the wider barriers to enterprise such as access to finance and low levels of consumer demand. Even then, we should be realistic about the number of jobs new enterprise can be expected to provide.

To truly address the jobs gap and rebalance the economy spatially and across sectors we propose the Coalition Government: 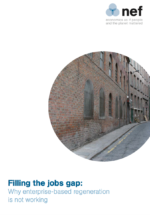