Now, as the economic crisis plays out in the UK economy, it is clear just how vulnerable the domination of chains on our high streets has left them. In times of recession, chain stores have proven to be fair weather friends. Some have abandoned the high street entirely migrating to large, high volume trading locations. Others have simply shut less profitable stores.

In 2009, at the height of the recession, we once again took stock of the nation’s high streets. We found Britain still to be a nation of clone towns. Key findings in Re-imagining the high street include that:

The UK’s highest-scoring clone town from those surveyed is Cambridge which managed a poor 11.6 on the clone town scale, with 0 – 100 representing clone town to home town. This may seem surprising. Cambridge, with its dreaming spires and huge tourist pull, might not be expected to snatch the dubious crown of the UK’s most cloned town out of the hands of our 2005 ​‘winner’, Exeter – which in our survey has slipped to joint second place with Reading. It is not so surprising when you look beyond the academic spires to the high street where you find diversity is a stranger with only nine varieties of shop reported in our people’s high street survey.

The highest-scoring home town was Whitstable, Kent, which scored an impressive 92.1 on our scale and boasts a wide variety of independent shops in the town. Famous for its Oyster Festival and a growing food culture, members of the community are trying to ensure that any further development within Whitstable celebrates local distinctiveness, and supports the development of a local culture that is sustainable.

Of the London Villages surveyed, West London’s high streets are losing their identity more rapidly than other parts of the city, with 9 of the 13 West London villages registered as clone towns. Richmond tops the table with just 5 independent traders counted on its high street. Only Shepherd’s Bush registered as a home town from West London. How long this status can be maintained remains to be seen with the opening of the largest urban area indoor shopping centre in Europe – ​‘Westfield London’ – right next door, complete with over 250 chains stores.

Of the 18 London villages that were re-surveyed from 2005, Hampstead, Camden and Brixton all moved from border to clone status. There was better news for Streatham Hill, improving from a border to a home town and Muswell Hill, which moved from a clone to a border town.

The recession has left holes on the high streets with the dramatic collapse of such household names as Woolworths and Barratts. In 2009 a reported 17,880 retailers had shut up shop. The towns most dependent on the biggest chains and out of town stores have proven to be most vulnerable to the economic crisis. The impact of high streets facing creeping abandonment, on our communities and our sense of social cohesion, is only beginning to be understood. But, it is becoming clear that a Big Society cannot be built on the fractured foundations of undermined local economies.

And, as we face the additional challenges of climate change and peak oil, we find that the cloning of our towns and cities has created a brittle infrastructure unable to respond to these challenges. Understanding this bigger picture is crucial to determining what antidotes are necessary to prevent the further homogenisation of our high streets and support Britain’s transformation towards a low carbon future.

Communities are already fighting back and the current crisis offers a huge opportunity to re-imagine our high streets. New powers such as the Sustainable Communities Act 2007 provide a way for residents to take control. The transition town network is inspiring increasing numbers to take action in their community and move away from our unsustainable dependence on fossil fuels. Ways to support increased local spending on the high street such as the Wedge Card and alternative local currencies such as the Lewes Pound and the Brixton Pound are being used more widely, and communities are increasingly taking control of services such as post offices and local shops to ensure their continued existence.

Rising to the challenge of climate change and peak oil will require a different development approach: one which harnesses the potential of local entrepreneurs, includes residents in the planning and delivery of schemes which intimately affect how they live, and recognises that public well-being is the overarching principle of success, not merely the growth of the retail sector.

With a little imagination, our high streets could become places where we go to actively engage with other people in our communities; places where shopping is just one small part of a rich mix of activities including working, sharing, exchanging, playing and learning new skills. As the hub of our communities, the high street could become the place where we begin to build a more sustainable world.

This report contains a range of policy solutions and actions to transform our high streets:

What you can do

What local government and other public institutions can do

What national government can do 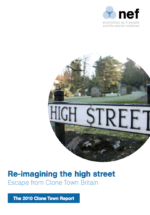 For the love of the planet

From the climate crisis to mass extinction to acidifying oceans, we’re living through an environmental emergency. What is this doing to our mental health?