Are British banks getting hidden subsidies?

Would banks be making any profit at all without billions in hidden subsidies from the British taxpayer and bank customers?

Increased scrutiny of the financial system in the wake of the banking crisis has shed light on a number of practices previously taken for granted, which now might be viewed in a different light. The sheer complexity of modern banking (itself one of the conditions that brought on the crisis) has worked to shield the sector from difficult questions. But, with the dust of public interventions now settling, a number of anomalies are emerging.

There is yet another, very significant, but rarely discussed and poorly understood free benefit enjoyed by the banks. This is only mentioned in passing here to add context, and will be the subject of a future briefing. But it stems from the fact that banks are gifted by government, in effect, a licence to create money. Few appreciate that the vast majority of new money entering the economy is lent into existence by the banks when, for example, they make personal loans. The popular myth that banks merely lend out the savings left by depositors has never been the case in the modern Western world. Here‟s how Martin Wolf of The Financial Times put it recently:

“The essence of the contemporary monetary system is creation of money, out of nothing, by private banks’ often foolish lending. Why is such privatisation of a public function right and proper, but action by the central bank, to meet pressing public need, a road to catastrophe? When banks will not lend and the broad money supply is barely growing, that is just what it should be doing.”

Because the banks then get the benefit of the interest paid on the money they have been allowed to create, that can be seen as yet another subsidy. Its precise value to the banks annually is a subject of debate, but previously it has been estimated to be worth tens of billions. 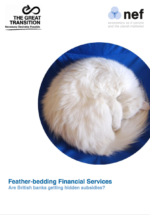