A new approach to industrial strategy

George Osborne’s Budget speech set lofty aspirations. He said it was about ​“reforming the nation’s economy, so it can have enduring growth, and jobs in the future.”

He wants a rebalanced, sustainable economy that promotes green employment. The Government’s Plan for Growth aims for ​“strong, sustainable and balanced growth that is more evenly shared across the country and between industries”.

These are fine words, and few would disagree with the aim. They are not, however, matched either by his analysis or action. Nowhere in the Budget or in The Plan for Growth is there any evidence that the business tax cuts, regulatory tweaks and relatively minor changes to public investment that are promised will deliver a major economic transformation. The Chancellor wants to ​‘put fuel into the tank of the British economy’ and is spending £5 billion on tax cuts. But there is little point refueling a wreck.

The British economy is poor at creating new private sector jobs. Research by the Manchester Business School suggests that of the 1.3 million new jobs created during recovery from the last major recession, over half were due to public spending alone. Public sector employment increased, but so did employment, nominally in the private sector, that relied on public funding. 1.3 million manufacturing jobs were lost, but finance and banking created only 35,000 new posts. Public spending took up the slack.

If that pattern is repeated, even the optimistic official growth forecasts imply that only 780,000 new private sector jobs would be created. This would leave a shortfall of 520,000 jobs. Unemployment would remain stubbornly high, with poorer areas worse affected.

The evidence shows that successful attempts in the past to restructure an economy have relied on decisive and confident government action. Strategic government intervention will be needed to deliver it now. This requires a completely new approach to economic policy in general, and industrial policy in particular. This report starts to set out this approach.

The starting point has to be clear economic objectives anchored in wider social objectives. UK industrial policy has failed when clear objectives have been absent. It has worked best when there have been objectives that fitboth industry capability and wider social needs – as in the case of pharmaceuticals and aerospace.

These objectives need to be developed in a transparent and democratic way. They are about the direction of our society, not some narrow technocratic agenda. In this report we have developed the case for ten objectives that flow from three broad, progressive goals: high well-being, environmental sustainability and social justice (see Box 1). There should be discussion about whether or not these are the right objectives – but not, we hope, about whether there should be objectives in the first place.

Why the government needs an industrial strategy

Some industries will be better placed than others to achieve any set of objectives, and this should guide any government strategy for selective intervention.

Of course, the choice is constrained by the realities of international competition, but neither the choice of industries nor decisions about how they should develop are totally constrained. We can create advantage rather than simply passively accepting our place in the world. We recognise that this argument will make some uneasy. Until recently, it was presumed that government attempts to steer the economy towards any destination would end up destroying the engine needed to get there. We believe, however, that the opposite is the case.

But why is government needed to create this advantage? It isn’t always — but sometimes it helps, for two reasons.

First, the benefits of this co-ordination flow to everyone involved, not just the initiator. This means that sometimes co-ordination is worthwhile for the whole of society but the necessary investment is not in any one firm’s interest. Government then has to step in.

Second, sometimes the costs involved for some companies outweigh the benefits – even once an industry is successful. Government involvement is needed to adjust incentives so that everyone benefits – otherwise one player may drop out and the whole system may fail.

Government may also have a crucial role to play in overcoming generally recognised market failures, and in ensuring that UK industry is not disadvantaged by the activities of other governments.

How should government intervene? Seven lessons from the past

The following are seven lessons from past successes and failures, in the UK and Asia:

What is needed now

Policy makers need to build on lessons such as these, as well as on the kind of objectives set out below. The aim must be to develop an approach to industrial policy equal to the systemic challenges we face, together with institutional arrangements capable of applying this approach. nef (the new economics foundation) is embarking on a programme to do this, building on a range of existing work. It will be part of a broader analysis of the long term ​‘Great Transition’ needed in the economy and society if we are to meet these twenty-first century challenges. 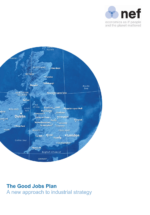